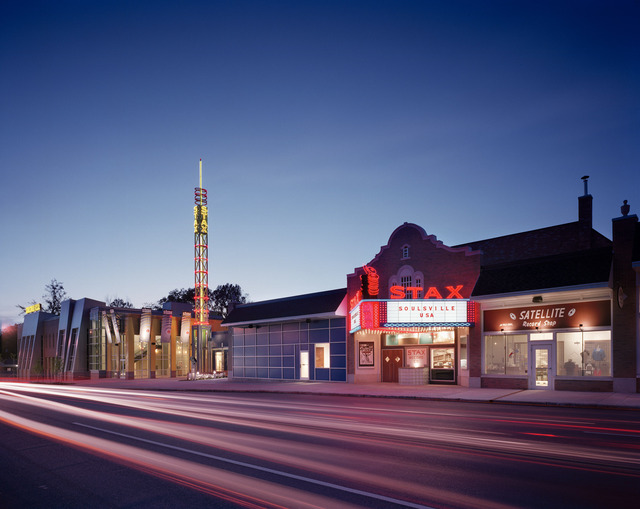 This theater is best-known as the home of the legendary Stax Records studios after its demise as a theater. Though the original building was demolished about 1989, a new building, Soulsville U.S.A., home of the Stax Museum of American Soul Music, has incorporated a replica of its exterior into its design.

STAX Music Academy and Museum of American Soul Music, Memphis, by Looney Ricks Kiss Architects and Self Tucker Architects
The STAX Museum of American Soul Music is not only located on the site, it also re-creates the original buildingâ€"the 1930s Capitol Theaterâ€"that housed the once-prominent STAX Recording Studio. The clients, a not-for-profit foundation, wanted a museum to showcase and memorialize the genesis and evolution of Americaâ€™s soul music. They also wanted as part of the music campus a separate music academy that would intervene in the lives of at-risk inner city youth and help revitalize the surrounding distressed neighborhood known as Soulsville, USA. â€œThis one is about community building at the scale of the neighborhood, it emphasizes a local part of the history and culture of Memphis,â€ said the jury. â€œWe support this one for social reasons, as well as for its design merits. It has an exuberance and a vitality to its forms.â€
Photo Â© Albert Vecerka/ESTO Photographics.

Here is a photo of Soulsville U.S.A.

Here is a 1989 photo by Dave Fisher:
http://tinyurl.com/yjzjmrj

The photo of the dillapitated Capitol theatre from 1983 has a record store called Satellite records next door. This was the home of Stax records before they became Stax. They started out as Satelite records. Gee Whiz by Carla Thomas was the 4th record and there 1st major hit and was sold to Atlantic. There next big hit was Last Night by the Mar-Keys. They then became Stax in 1961 and the rest was Memphis Soul history.

New photo has been posted of the Capitol Theatre with an early canopy and sign. Picture playing is “One Last Fling” released in 1949. Taken from the photomural inside the entrance to Soulsville USA on the site of the Capitol Theatre/Stax recording studio. The large gray square is a speaker mounted on the wall. 12/15/2012

Have also posted photos of the entire photomural.

Newest photos are of the present exterior and are courtesy of the museum.

Hey DavidZornig! I could use your help on a project. Would you please drop me a line at mkilgore@carload.com?