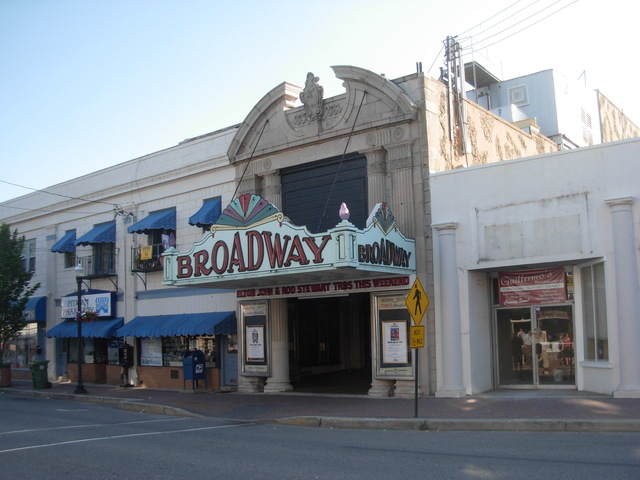 The Broadway Theatre has operated continously since it opened in May, 1926 as a fully equipped movie and vaudeville theater with 1,090 seats. This capacity includes the balcony and eight boxes.

The opulent theater was created in a French Revival motif by the Philadelphia firm of Eberhand, Magaziner, and Harris. Much of its original cast plaster detail remains intact and the original molds remain on the premises. Virtually all of the original decorative elements remain in the theater. However, the wall lighting sconces were replaced with Deco fixtures during the 1930’s. Some of the original lighting fixtures remain and could be used as models for restoration.

There are also two crystal chandeliers in the house and one in the inner lobby. Approximately 60 percent of the original seats on the main floor were replaced in 1960, however, the balcony retained its original seating. The original fire curtain and other stage equipment have remained in the building and some remain in use today. There is also a small orchestra pit, four private dressing rooms, a common room, two bathrooms, and a pipe organ blower room in the basement.

In fact, the Broadway still has its original theatre pipe organ. The 3/8 Kimball in the Broadway is, for its size, a unique instrument. The Southern Jersey Theatre Organ Society is fully restoring the Kimball. The return of the Kimball to concert status will be an important event to theatre organ enthusiasts.

The Broadway, which at one point was also known as the Capitol, painted the inner lobby in the 1960’s and 1970’s with little regard for the original colors. The original vertical marquee with individual lamps spelling BROADWAY was also changed to the current neon lit canopy marquee at an undetermined date.

The theater continues on today as the pride of Pitman and continues to delight audiences from around the area with movies and live performances. Renovation work was completed in 2002.

Hi newt, movie 534 here, just curious, what is your projection equipment there. Is it still 20 minute reels and carbon arc, or have you upgraded to 6000 foot reels and xenon? I hope that the theatre I have been involved with, the Ritz in Elizabeth gets sold soon, so maybe I can get some classics going there. We have 2 brinkerts with peerless carbon arc for light. The booth needs some work, but with the impending sale, everything is on hold.

we have a xenon bulb which im allways toying with to optimize light in the house. and working off the standard 20 minute reels with a platter system

the projector head and stand are symplex and the sound head is christies sorta a patch work but gets the job done.

and october is bride of frankenstein

WEDNESDAY OCT 22ND at 10:30am and 1pm the broadway will present james wales classic horror masterpiece BRIDE OF FRANKENSTEIN in glorious 35mm

with a live organist and classic trailers in the preshow

Looks like a handsome theatre. Love the marquee outside, too.

i miss running films there

Don’t think that this old photo has been posted yet:

Glad to see this theater still open, but, no longer showing movies. They did up to a couple of years ago. At least, I believe this part is true.

TV ABC 6 at 6 PM tonight showed the marquee of Pitman’s Broadway Theatre as it expressed birthday wishes to a local woman who turned 107 years.