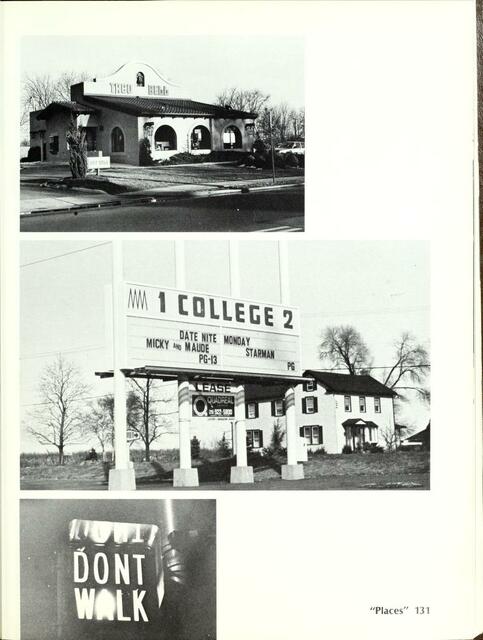 Located in the middle of the Collegetown Shopping Center, Delsea Drive at Heston Road. The Collegetown I & II was opened by National Mini Theatres Inc. on June 21, 1972 with Angela Lansbury in “Bedknobs and Broomsticks” & George C. Scott in “The Hospital”. It was closed in 1993.

Contributed by Scott A. Tucker
Get Movie Tickets & Showtimes

The shopping center was built in 1966.

The following is extracted from http://voger.blogspot.com/2006_04_01_archive.html:

“My late friend was the manager of the CollegeTown Cinema, a two-screen theater that showed second-run movies for a ONE DOLLAR ADMISSION. That’s right, a lousy buck! Even in the ‘70s, that was a crazy bargain. Some of the movies I recall seeing there: "Audrey Rose,” “Smokey and the Bandit,” “Interiors,” “Starting Over,” “The Goodbye Girl,” “Thunder and Lightning.” "

This theater closed in 1993, if I remember correctly This is currently a “Dollar Tree” store which was built over the atrium style entrance in 2001. The Marquis was also recently replaced by modern store signs (i.e. Radioshack, Subway, 2-guys Pizza(now defunct), and Dollar Tree). Some of the old theater can be seen from the store room of Dollar Tree (atleast in 2001-02) when they had the back doors open. The old air conditioning system is also still located on top of the left side of Kmart’s roof (they are a green color and look fairly neglected differing from Kmart’s grey units). Before the place was renovated into store front, a small mail slot could be opened to reveal the glass lobby counter/ snack stand that still had bits of popcorn strewn about (yuck- that was in 1998-it closed in ‘93), and a very modern ('80s) colorful angular paint job on the walls (which was about 10 feet from the entrance- with the auditorium doors on the right side).

We saw “Gremlins 2” there in 1989 when we first moved to Glassboro.

I was a college student and the first film I saw there was “The China Syndrome” in fall of 79. For the next four years that place became my go-to place for movies and the 1 dollar admission for a college student was the best. Spent many an afternoon and night there. Does anyone have any pictures of the Collegetown to display?