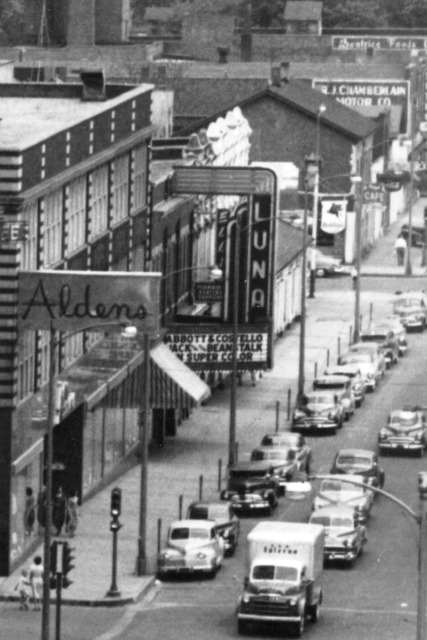 The site of the Luna Theater is now a parking lot, which is used as a Farmers Market on weekends.

The Luna Theater, 238 S. Schuyler Ave. in its early years showed grade-c movies. After a change in ownership ca. 1953, they upscaled to first-run movies in competition with the Paramount Theater on N. Schuyler. They were able to offer Cinemascope films with the stereo sound. Among their major coups overe the Paramount was the first to get the last film of James Dean, “Giant”.
On a personal note, the rock band “Ron Strawn & the Bucks” of which I was a member, made a stage appearance there in August 1958.
The films on that day were (as billed) “Dynamite Double Bill of Thrill Girls!”, ‘Teenage Doll’ and ‘Undersea Girl’.

In the Film Daily Yearbook,1941 a seating capacity is given as 880. In the 1943 edition it lists the Luna as being managed/operated by Paramount Pictures Inc. through their subsidiary John Balaban and it is listed as being closed.

According to our records, as of October 1st, 1949, Balaban and Katz operated this theatre.

The Luna was actually open until the late ‘60’s, operated by L&M Theatres after being taken over from Balaban & Katz. My first full time job as a projectionist was supposed to be at the Luna, as the crew there was to go to L&M’s Meadowview Theatre when it opened in 1967. I had checked out the booth and was all ready to start there when the Business Agent said the Luna crew had looked at the equipment being installed at the Meadowview and decided to stay at the Luna (actually, the Meadowview’s 4 track stereo sound system was taken out of the Luna.)

A couple of years after Meadowview Theatre in the Meadowview Shopping Center opened, L&M took over what had been the Majestic Theatre just across N. Schuyler from the Paramount (and originally another B&K house). The Majestic was closed for several years, but a developer was turning the building into a mini-mall. The stage area was bricked in and turned into stores, and the theatre balcony was removed making it a one floor theatre that copied the shopping center look of the times. The rest of the equipment was removed from the Luna and moved to the Majestic, now renamed the Town Cinema, although xenon lamps and a solid state mono sound system were installed. At that point the Luna was closed and demolished.

L&M and Plitt Theatres (the successor to Paramount Publix Balban & Katz) had an unusual booking arrangement between Kankakee and Joliet. Plitt had opened a shopping center theatre in the Hillcrest Shopping Center in Joliet just a couple of weeks before L&M opened the Meadowview. While Plitt retained the large Paramount Theatre in downtown Kankakee, L&M operated the large downtown Rialto in Joliet. They both had one other theatre in each town (the Luna was the L&M operation in Kankakee.) They would put the top two films available for the month at the top of a list. One month Plitt would get first pick, and the other top film would go to L&M. The next month they would switch who got the first pick. All other films were put into three groups. If Plitt got first choice for the Paramount in Kankakee or Hillcrest in Joliet, then L&M would get first choice of the three remaining groups of pictures. Thus if Plitt got first choice of the top film, and the other automatically going to L&M, then L&M would get first choice of the three groups of remaining pictures. Then Plitt would get second choice, and the third group would go to the remaining theatre — in Kankakee, the Luna until it closed. “The Graduate” was originally included in that third group until it began to get “buzz”, and was moved to the Meadowview for a four week run(pretty long in those days).

This meant the Luna did by and large play films of lesser quality although I remember the B.A. telling me that it was equipped with CinemaScope before the Paramount for the opening of “The Robe”. They did play a bunch of soft core X rated features and motorcycle flicks before it was closed.

The Luna had a balcony suspended by chains, and I was told that originally the booth was located at the back of the balcony, and with audience movement, the picture would bounce up and down on the screen. By the time I was scheduled to work there, the booth had been moved to the roof, and an opening made in the ceiling for the projection beams. One of my favorite stories was that the Luna had a magician for a children’s show, and one of the pigeons didn’t return to the stage. They looked everywhere for it. The next day when the opeator went to start the show he practically had a heart attack when he opened the lamp douser and the heat caused a pigeon to fly out of the lens barrel where it had been comfortably nesting overnight!

It occurs to me that I made an error in my description of the booth at the Luna yesterday. While it probably is of little interest, for the sake of accuracy: the booth was relocated to the roof, but the ports were in the back wall of the auditorium very close to ceiling level, not cut through the ceiling. The booth was reached by a long steep staircase through a door cut in the back wall of the auditorium, and the structure did extend above the roof line of the theatre itself, looking somewhat like a tar paper shack from the outside.

The booth that WAS put on the roof and did project through the ceiling of the theatre was at the Majestic up the street. The Majestic started out as a legit theatre, and the original projection booth was on the roof of the building next door. A feud developed between the owner of the building and the theatre, and the theatre was told to get its booth off the roof of the building. It was relocated to the top of the theatre, and was reached by going out a door at the back of the balcony, up a ladder to the roof, and then going into the booth by climbing down another ladder inside. The business agent said the operators did have a ladder inside the booth they could lower out the spot port and climb down to the balcony if the weather was too hazardous outside to navigate the external ladder.

According to the B.A., one of the reasons the Majestic was closed was that they couldn’t run CinemaScope pictures because the space between the beams for the projection ports wouldn’t allow the wider stage-filling format. That may explain why the Luna, which had ranked below the Majestic in terms of bookings managed to remain open, and the more prestigious theatre closed (as mentioned above, the Luna did premiere “The Robe” in Kankakee.)

It would be interesting to know if the Balaban & Katz Foundation has been able to save the architectural plans and revisions to theatres such as the Luna. B & K often made changes to keep up with the times. The Orpheum, a Rapp & Rapp B & K house in Galsesburg had anoteher, larger booth added at some point. That booth was removed when the theatre was restored and the original booth put back into service. Probably a slight case of architectural correctness overcoming practicality, since the newer booth would have been more flexible for the current theatrical use. Since B & K had to install motion-picture equipment in older theatres that they acquired, the plans for those theatres and their modifications would open a treasure-trove of information about them today.

1949 showed UNFAITHFULLY YOURS and SABU, THE END OF THE RIVER

I’ve found the trek to the Majestic booth most daunting, and cannot imagine how in hell they got the film up there. Out the balcony fire exit, up the exterior of the building and then back across the roof to the booth. And the angle of the projectors! Wow!