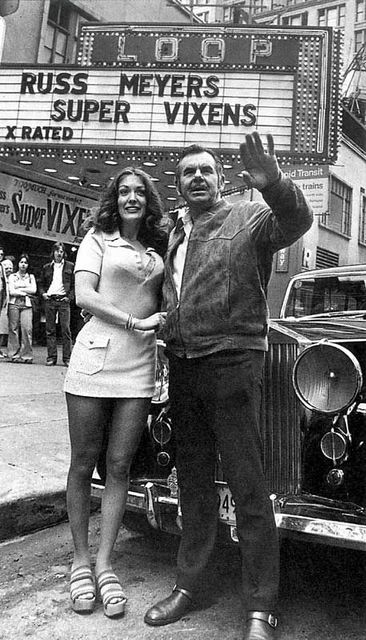 Originally known as the Telenews Theater when it opened on December 23, 1939, this small theater was once the place where moviegoers could see a couple of cartoons, a newsreel, a comical short, and the famous “March of Time” news reports, all in a single hour.

Keeping with its newsy theme, a United Press teletype clacked away in the lobby where an usher would spike the copy on the wall behind the machine.

The Telenews Theater had seating provided in orchestra and balcony levels. It was renamed the Loop Theater April 8, 1950 and began to show first-run features. In July of 1950, the newsreel policy was restored, as was the Telenews name. In August of 1953, the theater again switched to first-run films, and the name was changed, this time for good, to the Loop Theater.

In the mid-to-late-1960’s, the theater began to show a lot of B-grade films as well as Russ Meyer-type adult films, in addition to continuing to screen first-run features. The theater thrived during this mixed-format programming. The Loop Theater closed April 2, 1978.

For years, the former Loop Theater had housed a retail store but had been vacant for some time. The building was demolished in November and December 2005 to make way for a mixed-use 31-story high rise originally called MoMo (for Modern Momentum), but now called the Joffrey Tower, for the Joffrey Ballet, which is now housed in the building. The tower also is home to the Residences at the Joffrey Tower condominiums and two floors of retail space.

My mother took me to the Telenews prior to the Chicago or the Oriental when I was 5 years old. (They didn’t send me to kindergarten.) That’s where I saw my first teletype machine; and my first tv set (although there was nothing on at the time). That’s where I saw the Empire State Building crash; where I learned how to stand during the National Anthem; and where I got to see FDR declaring war. When I was at Northwestern, I went there (The Loop Theatre) and saw After Mein Kampf. It was a nudie documentary. And then in 1967, I took my new wife there to see the Graduate, with Dustin Hoffman. That theatre—inside a taxpayer—was one, classy place.