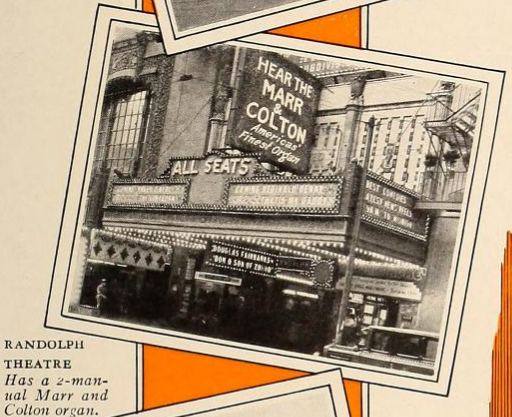 The Randolph Theatre opened December 23, 1918 after being delayed for months due to construction materials being in short supply due to World War I. It could seat 845, and was built for showing movies only, one of the earliest Loop houses built without a stage.

It was designed by the noted Chicago theatre architect Henry L. Newhouse, who work also includes the Metropolitan Theatre, Peerless Theatre, Howard Theatre, and Atlantic Theatre in Chicago, among others.

The Randolph Theatre, located on Randolph Street near State Street (near the Colonial [formerly Iroquois] Theatre–which was replaced by the Oriental Theatre in 1925), was within walking distance of many of the larger Loop houses of its day (such as the State-Lake Theatre, the Apollo [later United Artists] Theatre, and the Woods Theatre).

Part of the smaller Jones, Linick and Schaefer circuit, which also ran the popular Orpheum Theatre and Rialto Theatre elsewhere in the Loop, the Randolph Theatre was not anywhere near as fancy or large as its many neighboring movie palaces.

Instead of an orchestra, it had a lone organist, and also did not have a very large staff. Still, because of its location, at one of the Loop’s busiest corners, and its policy of catering to those who could not make shows at sold out showings at other theatres, it was a success.

The Randolph Theatre usually showed second-run features, often films that had played the major houses over a year earlier. It also leaned towards a male audience, playing mostly adventures, westerns or war films. In 1927 it was taken over by the Universal Pictures chain, who operated it into 1928.

The Randolph Theatre closed in 1933, and was replaced a year later by the popular German restaurant, Eitel’s Old Heidelburg Inn (which had debuted at the 1933-34 World’s Fair in Chicago), with its famed old German-style facade which included a clock with figures that moved as a song played each quarter hour.

Later home to Ronny’s Steakhouse, the building was demolished in the late-1990’s and replaced with the Noble Fool Theatre (which retained the Old Heidelburg facade and restored it to close to its original appearance). Unfortunately, the Noble Fool, a live theater company, was not successful at its new home between the Oriental Theatre and a Border’s Bookstore and closed in early-2004. Argo Tea moved into the space after the Noble Fool vacated it.

Nice item B. That’s what Ronnie’s dining room looked like as well. Only:

2) Remove the carpet and put in cheap tile floor

4) Turn the light level down by about half

It sounds awful. But it was actually pretty cool in a seedy, 70’s, 42nd Street sort of way.

Randolph Street is definitely great today. But despite what some say, I don’t think it is better than it was in the 70’s and 80’s. I think it is just great in a different way now.

Here is a 1926 view featuring the Randolph’s State Street marquee. In 1920, Jones, Linick, and Shaefer bought out a vacant site on state for a new second lobby cutting through to the Randolph.

I worked at the Noble Fool Theater from its move there to the end. It’s a shame the theater couldn’t have made a go of it. It was a cozy main theater, with a smaller one down the hall and a cabaret bar in the basement. And haunted too. I heard strange music and singing one afternoon while locking up when we didn’t have a show that night. No one next store at the Oriental either that might have been rehearsing. Didn’t scare me, but I didn’t stick around to find out if more was coming. The foundation was not current, as they probably just tore down the previous building to build new. That foundation, visible in the crawl space was very old mismatched stonework. Solid, but could it still emanate vibrations from the past as well?

Link doesn’t work. Are there some keywords to help search it?

For some reason it was very hard to select that URL without getting more characters than I wanted, or fewer. Anyway, here’s a clickable link.

Here is a THSA photo of the State Street entrance.

When the Oriental Theatre opened next door in May 1926 a problem arose. Variety reported: “The Randolph street entrance of the Randolph Theatre, directly adjoining the Oriental entrance, is causing quite a bit of confusion. Absent-minded customers go to the Randolph, then howl for a money refund, claiming that they mistook it for the Oriental. Because of this the Universal house was forced to place a sign over the box office reading: ‘This is the Randolph Theatre.’”

In the THSA photo of the State Street entrance posted 01/17/16 by Broan, the film “On The Boulevard” was a German film called “The Girl On The Road”, German: Die Kleine vom Bummel released in Germany December 30, 1925.

1998 Reader article that mentions Ronny’s Steak House also had a club inside called AM Funk Factory and a dance hall in the basement. Found this after posting a photo to the Photos Section of Ronny’s Too that utilized the State Street side entrance of the former Randolph Theatre. And used the same kitchen as Ronny’s on Randolph as I recall.