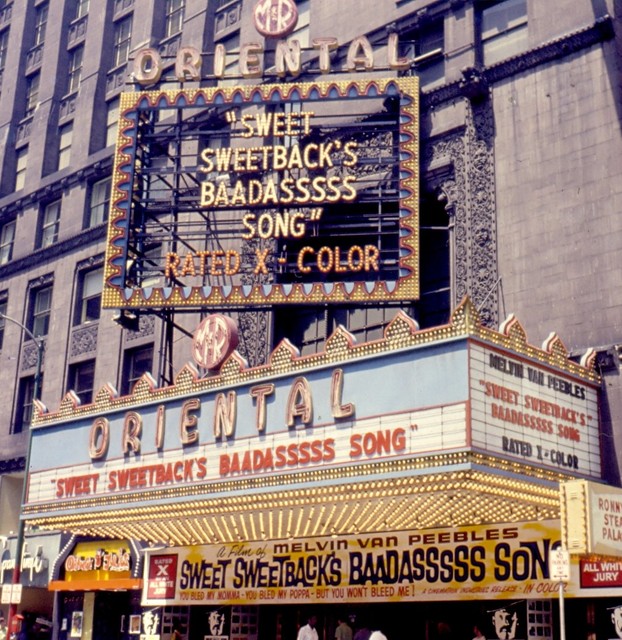 Opened May 8, 1926 on the site of the tragic Iroquois (later the Colonial) Theatre, and seating over 3,200, this was Balaban & Katz' first new Loop movie palace since the opening of the Chicago Theatre in 1921. Opening day at the Oriental Theatre included popular bandleader Paul Ash (who moved to the Oriental Theatre from B & K’s McVickers Theatre) presenting two musical reviews “Insultin' the Sultan” and “Harem-Scarem”. Harry Langdon in “Tramp, Tramp, Tramp” was the first movie to appear on the screen. Originally, ushers and other B & K employees wore costumes inspired by the “Arabian Nights”. The Oriental Theatre was equipped with a Wurlitzer 4 manual 20 Ranks theatre organ.

The Oriental Theatre, which stands on W. Randolph Street between N. State Street and N. Dearborn Street, was for many years, in addition to live stage shows and movies, also one of Chicago’s premier destinations for live jazz performances by many of the greats of the era, including frequent performer Duke Ellington.

The Oriental Theatre thrived through the 1960’s, but by the late-1970’s, however, the Loop was no longer the entertainment destination of earlier decades, and the Oriental Theatre, like many of the other movie palaces downtown, was reduced to B-grade action and kung-fu films attended for the most part by young people. It was closed on January 4, 1981 (having last been run by the Kohlberg Theatres chain), the Loop and the theatre’s fortunes had fallen into disarray. For several years, an electronics store operated in the lobby space of the Oriental Theatre while the remainder of the theatre was disued.

Shuttered for over 15 years, the Oriental Theatre was magnificently restored to its original exotic and over-the-top Indian-Indochinese style appearance in 1996 and reopened in 1998 as the Ford Center for the Performing Arts Oriental Theatre. The theatre is now host to live Broadway stage productions. On February 12, 2019 the theatre will be renamed James M. Nederlander Theatre.

The Oriental Theatre was added to the National Register of Historic Places in 1978.

YouTube link with November-December 1978 footage of the Oriental & United Artists beginning at the 2:46 mark.