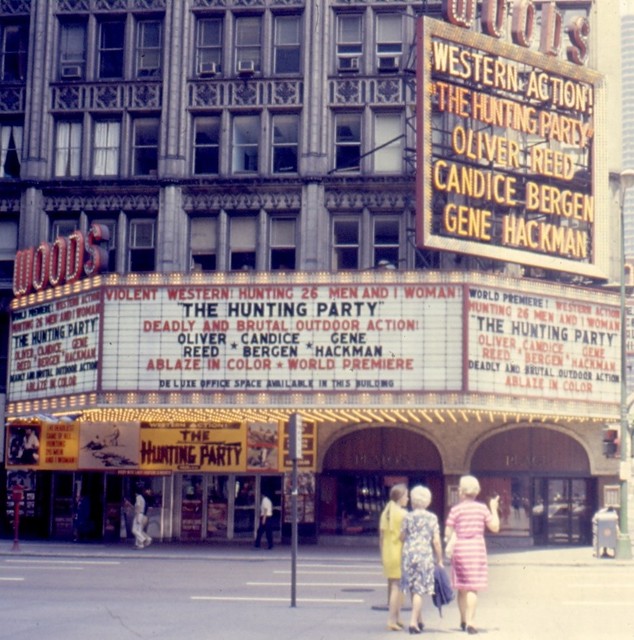 The Woods Theatre was opened March 10, 1918, and was constructed on the site of the Borden Block, an 1880 structure which was the first design by the firm of Adler & Sullivan. It was razed in 1916 to make way for the Woods Theatre and Office Building. The Woods Theatre originally featured a mix of legitimate theatre, vaudeville, and films and was opened officially as the A.H. Woods Theatre, but was always known simply as Woods Theatre (although some earlier listings of the theatre spelled it Woods' Theatre).

The exterior of the Woods Theatre was designed in Venetian Renaissance style, while the interior was a mix of Middle Eastern and Oriental styles.

The Woods Theatre originally sat over 1,300 patrons, and though not as large or glamorous as many of its neighboring Loop theatres like the Oriental Theatre, United Artists Theatre or the Garrick Theatre, which sat just a few steps down W. Randolph Street, the Woods Theatre was an immediate success. It was designed by Marshall & Fox, the firm which also designed the legitimate Blackstone Theatre in Chicago (now known as the Merle Reskin Theatre), as well as the Rialto Theatre on S. State Street, a burlesque and vaudeville house which ended its days showing porn (razed in the 1970’s). One of the firm’s best-known projects was the Drake Hotel, still one of Chicago’s finest hotels.

From the late-1920’s into the early-1930’s, the theatre was known as the RKO Woods Theatre, as that circuit operated a few Loop houses at that time in addition to the Woods Theatre, including the Palace Theatre, Grand Theatre, and their flagship in Chicago the State-Lake Theatre. By the around 1960, the Woods Theatre was part of the Essaness chain, and remained so almost for the rest of its years in operation.

By the 1970’s, the Loop was no longer drawing the the crowds of theatre patrons and nightlife seekers it had been for decades, and like its neighbors, the Roosevelt Theatre and United Artists Theatre, the Woods Theatre began to decline, both in its appearance and in the films which it played on screen, showing mostly action and horror films.

When Cineplex Odeon bought the Woods Theatre in the mid-1980’s, it attempted to clean it up, and began showing first-run fare there for the first time in many years. Unfortunately, it was too late for the Woods Theatre. It closed in January of 1989, and the last films on the marquee were “I’m Gonna Get You Sucka” and “Hellraiser II”.

Although the idea of converting the Woods Theatre into a concert venue in the mold of the Chicago Theatre was toyed with after it closed, nothing came to fruition and the Woods Theatre was razed in 1990, with plans to build a large office tower on the site (which never happened). It wasn’t until almost a decade later that the property finally became developed after many failed prospects, and today is part of the site of the new Goodman Theatre (which replaced its original home next to the Art Institute), along with the facades of the razed former Harris Theatre and Selwyn Theatre, further down S. Dearborn Street.

Article from the Tribune

Short story first- I heart movie palaces. Now for the long story – I moved to Chicago in 1979 right after high school to attend the School of the Art Institute of Chicago. For a film lover, it was perfect time and place. I got to relish the last days of the cavernous decaying grindhouses where you could just lose the day watching action and horror schlock, and catch the evening screenings of the classic and cult at the revival theaters such as The Parkway, Varsity and Sandburg (among others). I’d have my first time exposure to so many great films as they should be seen, on the big screen with an appreciative audience. Double features of Hitchcock to Marx Brothers, to John Waters and David Lynch. This is a story about one of the former, the majestic rat-ridden wonderful centers of entertainment that weren’t long for this earth. In its heyday, downtown Chicago was the place to catch a flick with dozens and dozens of downtown movie palaces projecting away day and night, but by 1989 only the Woods was left standing as the last surviving operating Loop movie theatre. Opened in 1940 with a yearlong showing of Gone With the Wind, for it went out with “I’m Gonna Get You Sucka” and “Hellraiser Hellbound 2” (not a pithy judgement call, I like ‘em all!). I went there for the first time when visiting my dad and happily stood in a line around the block to watch the James Bond flick “Diamonds Are Forever.” Back then I was doing weekly drawings for a Chicago Tribune column titled “Around Town” where I’d illustrate whatever reporter Rick Kogan wanted to write about. I was also researching the history of Chicago theaters for a never-realized graphic novel (which, 34 years later, will finally turn into blog postings). This time I thought I’d slightly fudge the facts and let the tail wag the dog using the press phrase “I’m from the Chicago Tribune” to get an all-access pass to the Woods’ last day. The manager, who was around my age, lets me, my camera and note-taking yellow legal pad right in. Today’s crowd for the 9am first showing consisted of three teens already caught up in talking back to a 40-foot-tall Isaac Hayes on the screen. The sleepy candy counter girl just seemed to be there out of habit. The popcorn machine is unplugged, there are no cups for soda and only 3 packs of candy are available under the glass display. I snapped away and worked my way up the 2 flights of stairs, stepped around the “Balcony Closed” sign, to the projectionist’s room door and knocked. Morton Krugman, projectionist for the Woods Theatre since 1953, lets me in. As soon as I get off my “I’m from the Tribune” greetings, a buzzer goes off warning that it’s one minute before the cue appears in the upper right hand corner of the screen to signal the reel change. When that shows, he has another 2 minutes before the next reel starts. Morton starts to rewind the wheel on the table which quickly spins until the last bit of celluloid feeds through, turning off the machine. Today’s films have been duly written on the pages he keeps secured to a clipboard chronicling the last 10 years of movies shown there. I pester and photograph away for the next half hour asking every unprepared question that pops in my head. I find out that normally his door is locked and chained to keep out the curious and intoxicated, but I just lucked out. Today was a late start since the manager didn’t get in until 8:50am but he still had to spend a half hour getting the machines ready. He’ll be able to get everything back to showtime schedule by just dropping out the coming attractions. He can watch the movie through the glass panel in the room, but since he doesn’t like much of what’s being screened, prefers to watch the TV (channel 5 comes in great but he can’t get in channel 2). Right next to the TV is a tape player where he puts cassettes management supplies of “urban” music to pipe in during intermission, which he also doesn’t like and doesn’t listen to. I ask to take a picture of him in his red chair that’s perched front of the viewing window. He objects. “A projectionist sitting down! Are you crazy?!” His long career has had him working at most of the Loop theaters. It’s in the blood as his father owned a chain of theaters all down Milwaukee Avenue. He remembers as a tot spending the day riding in a limo with dad to check on all the movie houses. It’s still a family affair since to get in the union you’ve got to already be related to a member. It’s also a strong union (the highest paid in the nation in fact). He started out at $60 a week and now he earns enough to easily retire. If fact, enough to have traveled to 30 countries over the years and, next week, has tickets to fly to Bora Bora with the wife. He started out like his father, acquiring second-run theaters that changed double features every three days, but ending up with an almost 40 years projectionist’s career. Along with two side businesses running a collection agency (including all Marshall Fields' accounts) and owning an “active seniors” complex, Mr. Krugman seems to be doing well. Hobbies? Bridge every week. He starts to tell me a story about projectionists who would have loud conversations in the booth and disturb the patrons. I keep on talking for another 10 minutes before it dawns on me that that was my cue to leave. I chit-chat with some other staff, and former employees who are hanging out and reminiscing. Within a month, the East West corner of Chicago and Randolph is an empty lot.

The photo labeled 1964 added by JohnnyM on March 10, 2020 is more likely late 1962. The 2 films on the marquee do not appear on the master list of Woods Theatre presentations that begins on January 1, 1964. “Almost Angels” was released in September 62. And progress on Marina City looks about the same in this September 1962 photo.