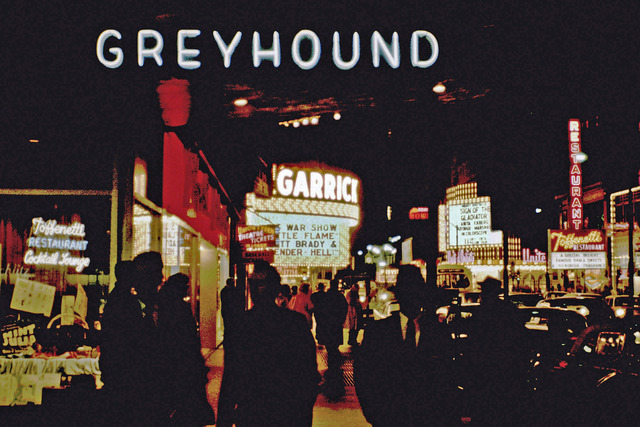 Originally named the Schiller Theatre after Friedrich Schiller, the German playwright, poet and philosopher, the theatre was briefly known as the Dearborn Theatre (1898-1903) before gaining its last name, the Garrick Theatre, in 1903, when the Shubert Brothers operated the legitimate house. The Schiller Building was designed by the firm of Adler & Sullivan in 1891.

On May 30, 1934, movies took over from legitimate theatre at the Garrick Theatre when the theatre was acquired by the Balaban & Katz circuit. The firm of Rapp & Rapp was hired during the 1930’s to remodel parts of the Garrick Theatre, including the main entrance, ticket booth and lobby areas, in an Art Deco style.

When Balaban & Katz announced it was shuttering the Garrick Theatre on May 19, 1960 and it would be torn down, there was one of the earliest organized public outcries in Chicago to save an historic building, but it was to no avail, since it was demolished a few months later and replaced with a monstrously ugly multilevel parking garage (that was itself razed in the late-1990’s).

A large portion of the façade featuring portraits of famous Germans was saved and was later incorporated into the entranceway of the Second City Theatre on N. Wells Street.

On the same block as the Garrick Theatre stood a handful of other theatres, now all gone as well – the Olympic Theatre (later renamed the Apollo Theatre), the Wood’s Theatre, and the Harris Theatre and the Selwyn Theatre (whose facades were salvaged and incorporated into the new Goodman Theatre, which occupies the former site of the Wood’s, Harris and Selwyn Theatres).

Ran across this in the Ryerson Collection. 4 pages. You need to enlarge them to read them. Copy & paste to view.

Posted some photos of additional Frederick Almenraeder Garrick Theatre heads I ran across. One in a display currently at the Chicago Cultural Center, in the West corridor on the first floor near the restrooms. History and confirmation of the 1961 demolition included. The other two mounted in a brick wall in the 1900 block of North Lincoln Avenue.

Urban Remains article detailing the disposition of ornamental features from the Garrick Theatre.

Circa 1915 images added courtesy of Ryerson and Burnham Archive, John Vinci Collection, and Bldg. 51 Archive via Urban Remains Facebook page. Below description credit Urban Remains. “the following pieces of ephemera were found by richard nickel while exploring/photographing adler and sullivan’s garrick (schiller) theater a few months before atlas arrived to begin wrecking it – likely in the winter months of 1960. demolition of the theater wrapped up in june of 1961. the programs mostly date to the early 20th century. the die-cut lithographed cardboard sign dates to the 1890’s, when the building was still known as the schiller.”