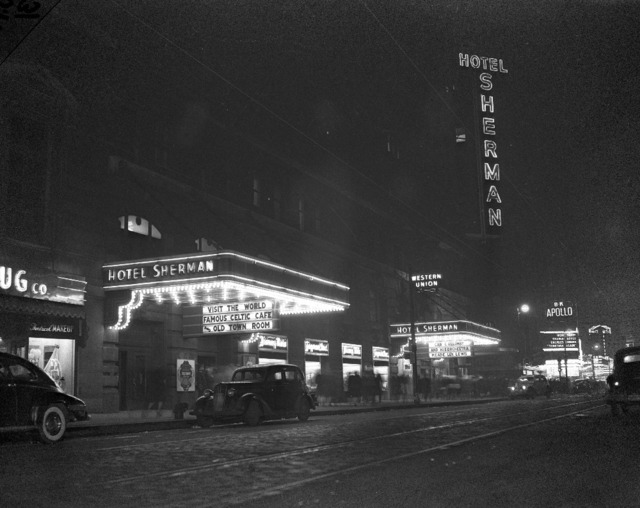 The New Chicago Theatre was opened in 1873 by actor-turned-producer James H. McVicker (whose self-named theatre opened almost 20 years earlier) on the site of the mid-19th century Kingsbury Hall, which had been destroyed in the Great Fire of 1871. The theatre was located on the corner of W. Randolph Street and N. Clark Street and seated over 1,500. The New Chicago was subsequently renamed the Grand Opera House, Cristy’s Opera House, and later, the Music Hall. In 1893, the Music Hall was remodeled and renamed the Olympic Theatre.

Its next-door neighbor was the Adler & Sullivan jewel, the Schiller (later Garrick) Theatre, and the Woods Theatre sat adjacent to the Garrick Theatre at W. Randolph Street and N. Dearborn Street. Just across from the street from the Olympic Theatre on N. Clark Street was the huge Hotel Sherman. Sadly, none of these buildings survives today.

A blaze in 1907 caused extensive damage to the Olympic Theatre, but it was soon afterward rebuilt and reopened, operated by the Shubert Brothers Theatre Company, and specializing in musical comedies. In the 1927, after the legitimate Apollo Theatre (1921) at N. Dearborn Street and W. Randolph Street was converted into the United Artists movie house, the Olympic Theatre took the Apollo name as Shubert’s Apollo Theatre.

Among the many stars to play the Apollo’s stage was Mae West, whose “Diamond Lil” was a major hit, and played there for nearly a half year during the first half of 1929, before moving to the Great Northern Hippodrome Theatre.

Surviving as a legitimate house (as well as a venue for opera, vaudeville and even minstrel shows) until August 22, 1934, when the Apollo Theatre was acquired by the always-expanding Balaban and Katz movie theater chain, and remained a movie house until closing in May of 1949.

After the Apollo Theatre closed, it was razed and replaced by a Greyhound bus terminal in 1953, which was in turn demolished in 1990 and replaced by the Chicago Title & Trust Building, which opened on the site in 1992.

The Joe Louis-Max Schmeling fight pictures, complete from beginning to end have been booked in as extra screen attractions at eight Balaban & Katz theaters starting today. In the loop the pictures will be shown at the Roosevelt and Apollo theaters; west side Marbro; south side, Tivoli and Southtown; north side, Granada, Varsity and Uptown. The pictures showing the knockdown in slow motion, also start at the Regal theater on the south side on Sunday

A 1999 book, “History of the Development of Building Construction in Chicago” by Frank Alfred Randall and John D. Randall says that the New Chicago Theatre was designed by the firm of Burling & Adler.

Here and Here are THSA pictures of the Apollo

December 17, 1922 program for “Shuffle Along”, seen on the marquee in the above mentioned photo.