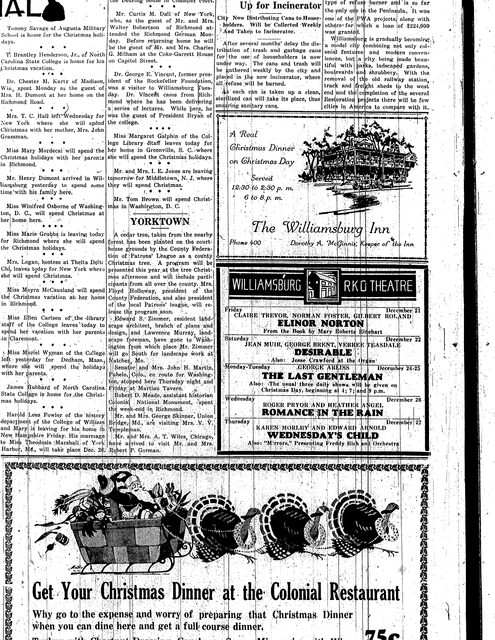 Currently known as the Kimball Theatre, this theatre has served the Williamsburg community since opening in 1933.

In 2001, a new 35 seat screening room was added, and allows the theatre to offer films to the community seven days a week, even when live performanaces are staged in the main 408-seat theatre. It was closed July 7, 2017. It had beopened by March 2020.

The Williamsburg Theatre was built in 1932 with an opening date of January 12, 1933. The Williamsburg was part of the RKO circuit. Seating is shown as 535. The address given is 428 W. Duke of Gloucester St.

This link provides the history of the theater.

The Kimball theatre homepage doesn’t talk about the history.

I’m glad that someone finall submitted this theatre.

I worked at the Williamsburg Theatre while in college (late 1990s) and dearly loved the place. It was built as the sister theatre to Radio City Music Hall (they opened on the same week) by John D. Rockefeller as part of his resoration of Colonial Williamsburg. It is located in “Merchants' Square,” a shopping and dining area adjacent to the restored area.

In keeping with the appearance of the colonial area, the exterior of the theatre was rather plain and resembled a house more than a theatre. There is no neon marquee or gaudy sign, but rather a simple poster case and sign featuring the name of the theatre.

The RKO chain preferred small theatre lobbies, as they made the shows appear to be more popular than they otherwise would by forcing a large crowd outside the building. The chandelier in the auditorium (which has since been replaced) was a copy of the ones in Boston’s Symphony Hall. It had to be lowered manually to change its approximately 76 bulbs.

At the time when I worked there, the capacity was 535 seats with a center aisle. The building was renovated around 2000-2001 to accommodate live programs in addition to films. The seating capacity was reduced at that time to approximately 400 in the main auditorium (with two aisles). A 30-seat screening room was added above the lobby (an area formerly occupied by offices) for film exhibition at times when the main theatre was in use for live programming.

The Williamsburg Theatre was one of the first air-conditioned buildings in Virginia and the original air conditioner unit (a Carrier Model 1) remained in use until the time of the renovation.

For the tech-heads, the main projection booth currently contains a pair of Century MSA/2 projectors (originally from the Williamsburg Drive-in, installed in this venue in the 1970s, and rebuilt at the time of the renovation), Kneisley Xenex 2kw lamphouses, and a Dolby CP500 with SRD and Altec speakers. The 30-seat screening room has a pair of Kinoton projectors (one FP-30E 35mm and one FP-38E 16/35) with a CP650, SRD, and JBL speakers. Both houses have new ISCO lenses. The screening room also has video projection capability.

Since the early 1990s, programming at this venue has consisted mostly of art and foreign films, with occasional late run mainstream titles mixed in. We also did midnight shows (mostly for William and Mary students) of older films in the late 1990s, but those seem not to have made a return since the renovation.

The theatre is owned by the Williamsburg Foundation.

In the spring of 2000, through the generosity of Bill and Gretchen Kimball of Belvedere, Ca., who donated $3.5 million for the project, a year-long restoration and renovation of the theater began. When it was dedicated on September 28, 2001, during the Foundation’s 75th anniversary celebration, the 410-seat theater was renamed The Kimball Theatre. In addition, a new 35-seat screening room, made possible by a gift from the Gladys and Franklin Clark Foundation, allows the theater to offer films to the community seven days a week, even when live performances are staged in the main theater.

The adaptation of the Kimball to house both film and live performance included the construction of an additional building to house the new stage, fly loft, dressing rooms and off-stage operating areas. New performance lighting and stage rigging were added as well. The speakers for the new sound system are artfully concealed below the extended stage apron and behind the acoustically transparent stage valance.

Richmond architects Glave & Holmes were assisted in their work by professional theatre consultants Lawrence L. Graham and Charles I Swift of Atlanta.

Shortly after the Kimball was renovated, it was determined that the PA sound system was not proper for the film performances, with many complaints. A separate film sound system was added with the subwoofers being the only shared channel between PA and film.

The film speakers are flown and are lowered, in addtion to the screen, for film performances. It was important for the theatre to retain is rather period feel so the surround speakers have been mostly concealed. Four reside in the “slots”, four are hidden in the “Tech balconies” and two can be seen as blisters just below the projection ports.

Circa 1964 photo added courtesy of the AmeriCar The Beautiful Facebook page.

Colonial Williamsburg has announced that they will close the Kimball Theatre on July 6, 2017 after two decades of financial struggles. The last time the Theatre was profitable was in 1999. Last year it lost $782,000

This seems to be open again.