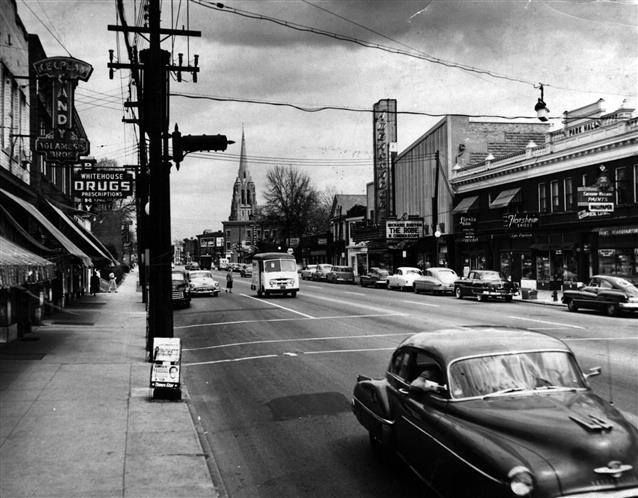 The Park Hall Theatre was opened in 1913. It was still the Park Hall Theatre in 1936, was soon renamed Oakley Theatre. On February 6, 1947 following a remodel it was re-named Ambassador Theatre, screening Van Johnson in “Thrill of a Romance” & George Raft in “Johnny Angel”. It was closed in late-September 1982.

This is from Boxoffice in October 1945:

CINCINNATI-Sale of the Oakley Theater building on Madison Road and plans for extensive modernization of the building were announced last Saturday. The building contains three stores, a theater and a lodge hall.

Following the sale, the owners leased the property to the Amnassador Theatre Co. for a 20-year period. It is planned to spend more than $75,000 modernizing the building, which fronts 70 feet on Madison Road and extends back 289 feet to Markbreit Avenue.

August 9 1974 THE STING opens,at the Ambassador. It was under the banner NEIGHBORHOOD THEATRES. They ran 11 screens in Cincinnati. IT was 2.50 a seat to see the STING.

Does anyone know if the Ambassador featured some “double” seats?

(They’ve been described as small loveseats.)

I worked the AMBASSADOR THEATRE during the strike of 1974 when Levin Services operated the theatre along with the 20TH CENTURY, ESQUIRE and HYDE PARK. They also ran two drive ins. The JOLLY ROGER was later added to the strike. There was no balcony. It was vandalized during the strike as seats were slashed, screen slashed, speaker wires slashed (this theatre was a magnetic stereo sound), the 4 projectors were destroyed by taking a crow bar to the intermittents, the carbon arc generator had its wires cut. The print of THE STING was ruined by pouring film cement on the side of each reel. Reel 7 was saved by still being in the bottom magazine. It took us 2 weeks to reopen.
Levin’s did close the theatre as well as the other ones. AMBASSADOR became an ACE hardware for some time.

Ashamed of my Union for doing this,I assume it was Iatse since not a lot is given about the Strike.I don’t see that happening where I live in Georgia.

Mike, it was rumored that the Chicago union (which was very strong) was responsible for the break in. Levins had a a story that the drive in they ran there near Chicago contract was up for renewal and they walked in, told to sign the contract on the table without discussion or negotiations.

hanksykes said earlier that the Park Hall Theatre was built in 1913 by builders Moorman & John. The January 4, 1913, issue of The Moving Picture World ran an item saying that builders Moorman and John, of Oakley, Ohio, had commissioned architect Edward Sloctemyer to design a theater for them, which was to be built on Madison Road near Gilmore Avenue. No theater name was given, but it must have been the Park Hall/Ambassador.

Mike, I bet we could spend hours talking about the good old days.

Grand opening of the Ambassador was February 6, 1947. Opening ad in photos. Closed at the end September of 1982 and purchased by the city.

Mike Rogers and Moviemad - I’m trying to find people who attended a December 20, 1974 world premiere of a movie called Let’s Go for Broke at the Ambassador Theater. It starred a new actress named Christa Helm, who would be murdered just a few years later. Do either of you recall this screening? Please send me an email at if you do. I’m writing a book about Christa and any info will be much appreciated.