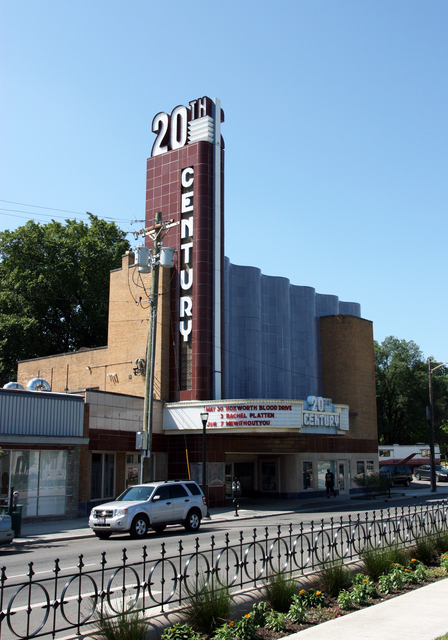 A beautiful Streamline Moderne style theatre that opened on August 1, 1941 with Tyrone Power in “Blood and Sand”. It had a seating capacity for 900, located in orchestra and balcony levels. The 20th Century Theatre was designed by Maffit, Alcox & Stritzel, architects for the F & Y Building Service.

It closed in 1983 and languished for the next ten years until the community became involved in restoring the theatre. 20th Century Productions took over operation of the 20th Century Theatre and reopened it in 1997 as a mixed concert and banquet hall.

The 20th Century and the Ambassador Theaters were in the Oakley neighborhood of Cincinnati and were about a block apart. The United Dairy Farmers Store was originally directly across Madison Road from the 20th Century where one could buy ice cream cones, etc. Across from the Ambassador was a wonderful ice cream parlor run by the Aglamesisi Brothers. http://www.aglamesis.com It is still there and it is a real, rare treat. Incredible ice cream , malts, shakes, sundaes, all manner of candy and ice cream treats. Definitely worth the trip.

I spent many a Sunday afternoon at the matinees with my friends for $.25. Had my first real date there as a 4th grader. Took a lovely 3rd grade beauty to see The Ten Commandments. Chauffered by my older brother in dad’s ‘49 Packard. Ah, the memories.

The original owner was Willis Vance he had quite a few local cinemas, including The Ohio in Norwood,Guild in Cincinnati,,State in Newport,Kentucky and others. He seemed to keep F&Y Construction Builders very busy.

In 1956 our family drove done to Cincinnati to from Troy, OH to see “Around the World in 80 Days” and I am trying to determine if this was the theater that we saw the film. I cannot understand why we had to drive to Cicinnati to see the movie. Can anyone offer and ideas?

My guess would be that it was being shown there in Todd-AO, a 70mm widescreen process that originator Michael Todd created to rival Cinerama. If that was the case, you probably saw it at the Valley Theater which installed the necessary 70mm equipment around that time specifically to show that film in Todd-AO.

JenniWiethe……surprise of your day! I can tell you a LOT about your Grandfather. I was his closest friend in Florida. I wrote the sreenplay for the Movie “Little Laura & Big John” I own the copyrights to it. I also Produced it, Directed and Edited it. I owned the Movie Studios in Ft. Lauderdale where it was filmed. I still live in Fl.and am writing my life story, “MEMORIES and FANTASIES” and he will be mentioned in it. You can write to me at and I will be happy to hear from you. Thanks, Luke Moberly

To JenniWiethe….P.S. Lou Wiethe raised the money for my Movie so he was the “Executive Producer” Send me your E-Mail address and I can send you pictures of our Movie if you like. Luke

It was operated by Levin Services during the 1974 union strike against all of the Levin Theatre in Cincinnati except for one of the drive ins.

On December 28, 1974, there was a world premiere of a movie called Let’s Go for Broke at the 20th Century Cinema in Cincinnati with the stars in attendance. One of the stars was Christa Helm, an amateur actress who was murdered in Hollywood in 1977. Her murder has not yet been solved, and I’ve been investigating it for the past six years.

I heard that the mayor was also in attendance during the screening, so I would think there have to be photos of Christa at this event. I know it’s a long shot, but if anyone on this forum recalls attending that evening and meeting/having their photograph taken with Christa, I’d love to chat with you. My email is or you can just reply on this thread. Thank you!might have?