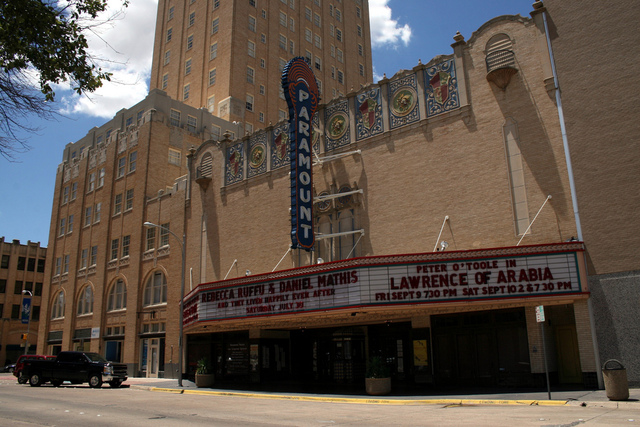 The Paramount Theatre in Abilene opened its doors on May 19, 1930, and most of the city turned out to witness the fanfare, which included the Buddy Rogers, Carole Lombard film “Safety In Numbers” and a blazing marquee lit with over 1,400 electric bulbs up and down the 90-foot marquee.

Built in an Atmospheric Spanish style, its 1,403-seat auditorium resembled a Spanish-Moorish courtyard, complete with arches and gateways, and a deep blue, star-lit sky on the ceiling. The lobby, mezzanine and foyer areas were equally dazzling, with tilework, handblown glass lamps, oil paintings, and ornate bronze statuary on the stairs leading to the balcony.

During WWII, the Paramount was heavily frequented by soldiers from the nearby Camp Barkley who enjoyed live stage shows and feature films. The Paramount continued to remain open until the mid-1970’s, when Abilene’s downtown business district began to decline. In 1979, it reopened briefly as the Paramount Opry, a country music venue.

In 1984, the Paramount Theatre was slated for demolition, but a month prior to the date wrecking was to begin, a group of concerned citizens with a love for the old palace formed the Paramount Committee, and secured the deed. An anonymous buyer purchased the theatre and provided generous funds with which to restore the Paramount to its former glory.

From 1985 to 1987, the Paramount Theatre underwent a painstaking restoration, as well as being given state of the art projection, sound, and lighting equipment. The Paramount’s renovation received the prestigious Texas Award for Historic Preservation from the Texas Historical Commission.

The Paramount Theatre had its grand reopening in 1987 and now is home to the popular Classic Film Series, as well as concerts, stage shows, and orchestra performances. The Abilene Paramount is listed in the National Register of Historic Places and is a member of the League of Historic American Theatres.

Great shots of the good-looking theatre, I wonder how many PARAMOUNT theatres there have been in the U.S?

From the 1940s a postcard view of the Paramount Theatre in Abilene.

The Paramount Theatre in Abilene.

Cecil Bellew was manager of the Paramount Theater and then the Westwood Theater. http://www.texnews.com/1998/1999/obits/1229.html

The Paramount’s marquee was featured prominently in a “Cold Case Files” episode about a robbery and killing in a jewelry store down the street from the theatre.

I remember the world premier of “Take Her She’s Mine” in November of 1963 at the Paramount. Big searchlights in the street out front and the appearance of Jimmy Stewart and Sandra Dee in person. The Hardin-Simmons Cowboy Band played outside before the theater was opened to let ticket holders in to watch to movie.

Seattle has an active Paramount theatre still as well. Was restored years ago with a much bigger stage and state of the art seating. Original blade sign too. Interior is french in style. Very elaborate and large auditorium. Located in a great area of downtown. 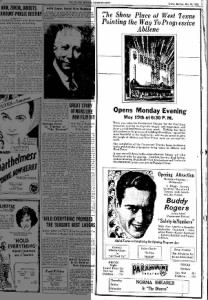