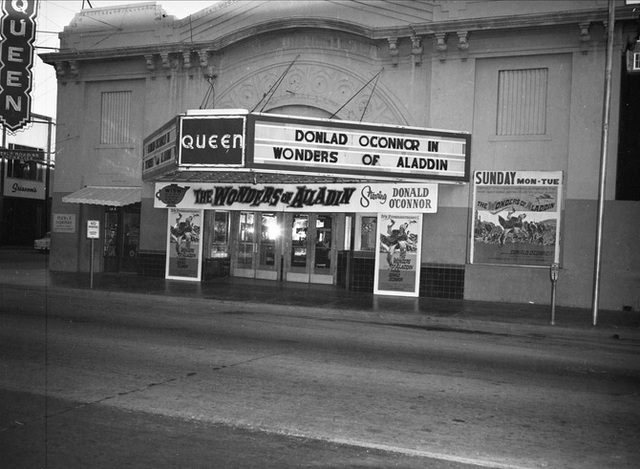 Lost Memory, I dug the Newspaperarchive.com and found that it was closed by Interstate in 1966 when the Westwood opened.

The Queen closed after a fire in 1938. A local paper announced the re-opening in September 1938:
http://tinyurl.com/ksyldx

That should have been 1935 for the fire, then the re-opening three years later.

After the reopening of the house in 1938, it looked like this (though the undated photo appears to have been taken in a later year.) The windows on the second floor had been bricked up, but the brackets under the cornice are recognizable.

A still later photo is dated 1960, but the movie being advertised was released in 1956. The decorative details of the facade are barely visible, perhaps because this is a night shot, or perhaps because they have been covered by another coat of paint.

Still, the theater’s front appears to have looked about the same throughout its history, except for the addition of a modern marquee, probably in 1938. Any significant changes that resulted from the remodeling done that year, designed by architect David S. Castle, must have been on the interior.

Little detail is visible in this photo of the Queen’s auditorium, but it’s bright enough to reveal that the house had a stadium seating section. The photo is dated 1960.

The undated photo of road construction dates from 1959-60 when Abilene tore up every street to “modernize” downtown, hastening the flight of shoppers to new shopping centers on the edge of town. The Queen was still operating in May 1963 – I saw “Lawrence of Arabia” there.

There were six movie theaters in Abilene c.1930-1960: Paramount (the finest) and Majestic on Cypress St Queen on N 2nd Broadway on S 1st Linda and Texas on Pine Linda & Texas showed only B&C movies and serials Only the Paramount remains

Built by the Queen Amusement Company and supervised by the folks who built Dallas' Queen Theatre was the magnificent Queen Theatre in Abilene launching with “For a Woman’s Fair Name” on March 15, 1916. The pipe organ showed up a bit late to the $25,000 theater but patrons were impressed. The Queen played “The Birth of a Nation” with a symphony orchestra of 25. David S. Castle — who also architected Abilene’s Paramount — delivered a wonderful 600-seat auditorium that made it to its 50th birthday. But Year One, the theater changed hands 8 times as not everyone was sold on the Queen.

A May 31, 1935 fire cost $5,500 to repair and was said to have been ready to open that August. However, its operator decided against reopening it when the Majestic — dark for five years — reopened. Texas Consolidated Theatres would be positioned as a second-run house with “rock bottom” pricing. It relaunched on September 3, 1938 with “That Old Barn Dance” and"Torchy Blane in Panama.“ Interstate took on Texas Consolidated and ran the Queen nobly until it created the suburban Westwood Theatre that opened July 28, 1966. And the Queen bowed out gracefully and with a large crowd for its final showing July 27, 1966 with "The Sound of Music” which ended a 14-week run there.

The Queen sat empty and by 1971 was seen as a fire hazard. Talk about removing the Queen were on and it was part of a beautification proposal. The Queen’s seats and equipment were removed in May of 1974 and was bulldozed in July 1974 to make way for the Vera Hall Minter Memorial Park.