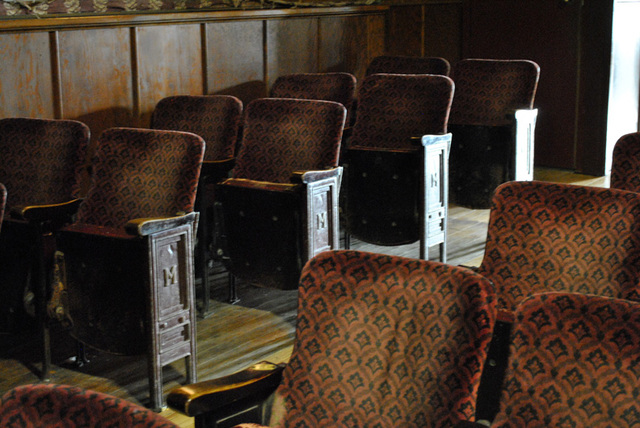 According to a The Times Herald’s Movie Section the Milford Cinema IS showing WALL-E .However their phone # is not in operation.Does anyone know of a working phone # for this theatre?

i saw a movie in the dead of winter here 25 plus years ago on the way home from a pocono ski weekend We were enticed by the the sign “come on in – we have heat!”. Tiny lobby was warm and cozy …the theatre you could hang meat in. We laughed and shivered all the way thru the movie that we taken by the sign.

Failing Health Believed Cause of Suicide of Thomas C. Pitney

MILFORD â€" Despondent because his health had failed and financial difficulties increased, Thomas C. Pitney, former owner of the Milford Theatre, killed himself with a shotgun in the abandoned theatre building at Fourth and Catherine streets next to his home yesterday. He was found lying on the floor by his wife who went to the theater shortly after 5:30 p. m. Mrs. Pitney had seen the theater door swing open when she looked from a window of her home a few minutes before and went over to investigate the cause. The theatre had been closed for a long time.

Dr. Walter Shannon and Sheriff Roswell Palmer were called. Dr Shannon said that Mr. Pitney had not been dead more than an hour when he arrived at 5:45. No one had heard the shot.

Sheriff Palmer said he believed Pitney went to the building late yesterday afternoon and prepared to end his life by connecting a wire hook to the trigger of his old shotgun. Seating himself on a cushion he placed the barrel of the gun in his mouth, it is believed, and discharged the gun by using his foot on the wire hook. His foot was caught in the hook when he was found. Coroner C. S. Black gave a verdict of suicide.

Mr. Pitney had lived in Milford most of his life and for many years had conducted the Milford Theater. He also managed the bus line from Milford to Port Jervis for several years.

Neighbors said last night that he had become despondent because his health had prevented his working any longer. They also said he had complained of financial troubles.

I found the article about Thomas C. Pitney very interesting. I am impressed that you were able to retrieve such an old article. Do you know what his wife’s name was? The article does not give any details, like how old he was. And if this happened in Milford, Pennsylvania, why did the Connecticut Police investigate the shooting? I look forward to learning anything I can about this. I believe the man in the article was my greatgrandfather. I was told he used to own the Milford Theater, but information about him has always been very vague.

Mrs. Thomas Pitney, wife of Thomas Pitney, the bus operator between Port Jervis and Milford, Pa. was seriously injured Sunday afternoon when her touring car turned turtle on the wet state highway a short distance from this city on what is known as Pocono Farm Road. Mrs. Pitney sustained a fractured jaw, serious lacerations about the head, a bad shock and probable internal injuries. She was rushed to St. Francis Hospital, Port Jervis, where she received treatment.
According to witnesses, Mrs. Pitney had several passengers in the car and was endeavoring to get them to Port Jorris in time to get an Erie train and when she came upon tho curve the rear end of the car skidded and the machine turned turtle.
As far as can be learned the other occupants of the car were not injured.

Her name looks to be Martha Drake Pitney. From the Daily Record, Stroudsburg PA, May 22, 1964:

NEW YORK â€" Thomas S. Kauten has been named business development director of Carter, Berlind and Weill, investment bankers and members of the New York Stock Exchange recently.
Kauten is the grandnephew of Mrs. George Watson of Stroudsburg and Mrs. John Lane of Port Jervis. Also, his mother is the former Margaret Pitney of Milford.
He is the grandson of the late Thomas Pitney and Margaret Drake Pitney of Milford and the great-grandson of the late Stephen Drake and Martha Faulda Drake of Milford and Dingman’s Ferry.
As business development director, Kauten will work with institutional accounts and with companies with which the company maintains a financial advisory relationship.
A graduate of Hofstra College, Kauten received a master’s degree from the institution and did additional graduate work at Yale University.

Thank you for the update. My parents and grandparents have passed so there is no one I can ask. The information is appreciated.

Reading the Ghost Story post earlier every old theatre must have a ghost or two. My first job was at the LOEWS MELROSE in Nashville, Tennessee it was said their was a ghost there “Mr.Bowman” he was called.It was said that he was one of the first Managers there and drank alot and killed himself in the Letter Room in the back of the building.I did see some scary stuff in this buildings after hours when we would hang out in the theatre.

Thomas Pitney built the Milford Theater in 1920. After years of health and money problems, he committed suicide in the empty theater on the stage by attaching a wire to his shotgun. His wife found his body an hour later.

When Sunflower Hill Productions performed in the theater, they always kept the middle seat of the fifth row empty for Pitney. They placed a little stuffed toy man wearing a black satin cape in the seat. He was Pitneyâ€™s representative. When this surrogateâ€™s hand was squeezed, he would let out a maniacal laugh. Mr. Pitneyâ€™s ghost was sighted many times in the theater. Such sounds as a spirit going up the steps on the right aisle, or the projectionistâ€™s report of walking through first bone-chilling cold and then a hot little breeze from Pitney.

After Pitneyâ€™s death, a psychic was asked if there should be a mass for his soul. She said, â€œNo, his home was in the Milford Theater and he is still in contact.â€ Further, she said, â€œif they needed anything at the theater, they should just ask him.â€

The Black Bear Film Festival will highlight twelve features at the Milford Theatre Friday through Sunday, October 14-16, 2011. A centennial tribute to D. W. Griffiths on Sunday will include three 1911 films, portions of which were filmed just miles from the theater (this is also the centennial of the theater). The Film Salon this year will feature short films, annimation, guest speakers and submissions from local students and is free of charge. There will be an Opening Night Gala at the Tom Quick Inn. Individual event tickets start at $10. Information at www.blackbearfilm.com or 570-409-0909.