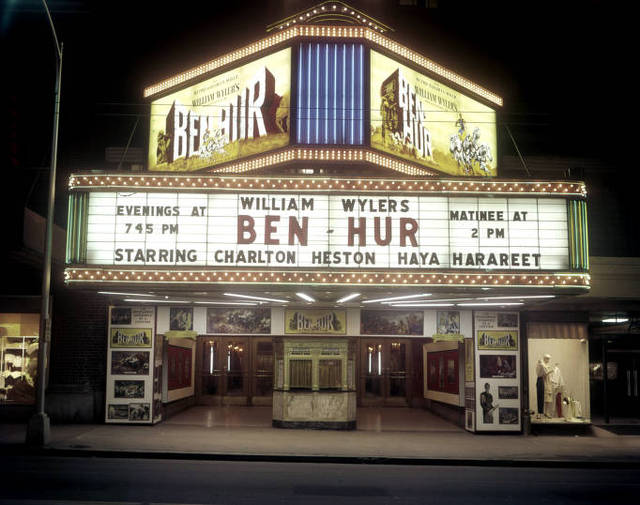 This theatre was a movie palace contained inside a complex of buildings which also included the Henry Grady Hotel. It was built in 1926 and opened November 15, 1926 as Keith’s Georgia Theatre, with Laura La Plante in “Her Big Night” and 5 acts of vaudeville. It was renamed the Roxy Theatre on December 30, 1938, reopening with Jane Withers in “Keep Smiling” and variety acts on the stage. It was converted into a Cinerama theatre from April 12, 1956 screening “This Is Cinerama”. It was demolished in 1972 to make way for Atlanta’s seventy-story Westin Peachtree Plaza Hotel.

According to recent reports, the Roxy’s theatre organ is to be be re-installed in the Strand Theatre, presently undergoing restoration and located in nearby Marietta, GA.

The Walt Disney movie “Herbie Rides Again” opens with a series of implosions of old buildings during the titles. One of those is the Henry Grady / Roxy.

The Roxy auditorium shared a wall with the old Capitol which, as mentioned above was later taken over by the Davison’s department store. Since that was the extent of the demolition, about a third of the auditorium was not part of the implosion, but was removed by machine over the course of the next couple of months. inside this shell, some drapes, seats, and part of the balcony were visible, especially to those of us who rode the bus by the site.

I remember seeing “Viva Max”, “The Parent Trap” (reissue), and a Richard Brooks double feature of “The Professionals” and “In Cold Blood” here. In addition to “Willard”, I seem to recall that the first run engagement of “Bullitt” was here, and in the spring of 1970, the first run of “Z”. During its final weeks it played such epics as “The Thing With Two Heads”, with Rosey Grier and Ray Milland (as in Academy Award Winner: Ray Milland), “Big Bird Cage”, and “Caged Heat”. On opening day of “Caged Heat” they had some models in very skimpy prison outfits handing out flyers on the sidewalk in front of the box-office. Showmanship at its best, right up til the end.

Reguarding the demolition of the Roxy and its relationship tothe Capitol theatre. The Roxy was built several years before the Capitol and did not share a common wall although both building where next to each other. The Roxy auditorium was a little strange in its layout. the south was was next to the Capitol/Davison Store. the stage house was free standing and the north wall was common with the Cain street addition to the Henry Grady Hotel (this was a loft and office building). The entrance, lobby, and projection booth were all tucked in under the 13 story back side of the Henry Grady.
When the theatre and hotel where torn down everything from the front of the projection booth all the way to the back of the flyhouse and on each side was torn down with the wrecking ball method.
The only parts of the theatre that where imploded where the lobbies and projection booth area. In may articles for the Atlanta Chapter ATos I have several of the demolition photographs.
One of the photographs shows a large beam running over the projection booth which held up that side of the hotel structure.
For much more on the Roxy google up Atlanta Chapter ATOS and pull up the January and Febuary newslettlers for a more indepth history of the theatre.

Andy Griffin star of “ANGEL IN MY POCKET” attended the Atlanta opening. He greeted his fans and made time to promote the movie.
BOXOFFICE FEB. 10 1969.

From Atlanta a photo postcard that captured a view of the Roxy Theatre.

Just came across and story dated Jan.20, 1944 in the Atlanta Journal, where the owners for the Henry Grady Hotel announced plans to build a 30 story addition to the hotel. According to the article, all the financing was approved and they would be ready to begin construction at the end of the War and when men and materials would become available. The new addition would mean that the auditorium of the Roxy would be torn down so that the new 30 story addition could be built. The lobby of the Roxy would then become the new lobby for the hotel addition.
For what ever reasons these plans were never carried out, so the Roxy almost shared the fate of the Capitol Theatre next door.

The Roxy was a magnificent theater. I remember as a teenager going to Atlanta for the the first time with my MYF group in 1959 to see “Ben Hur”, what a time we had that day. So sorry it was demolished, but so glad I got to experience the Roxy.

Grand opening ad in photo section and below. 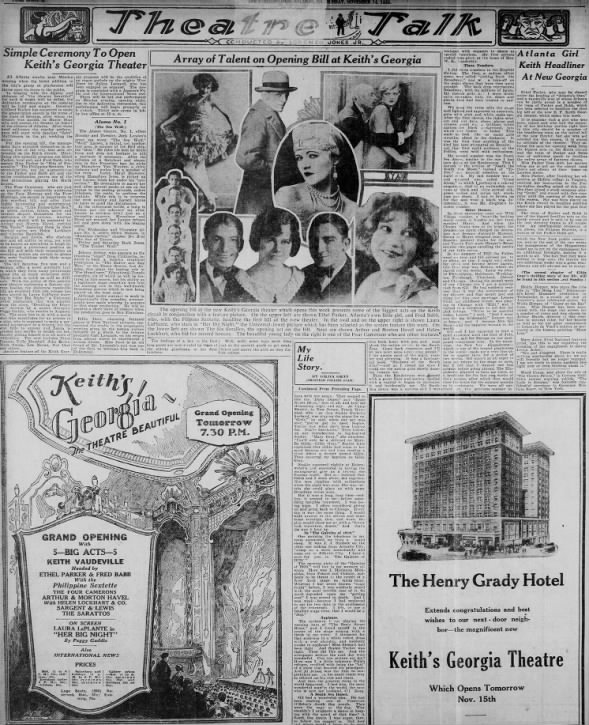 Reopened as Roxy on December 30th, 1938. Another ad in the photo section. 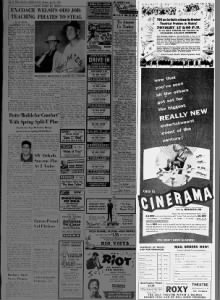