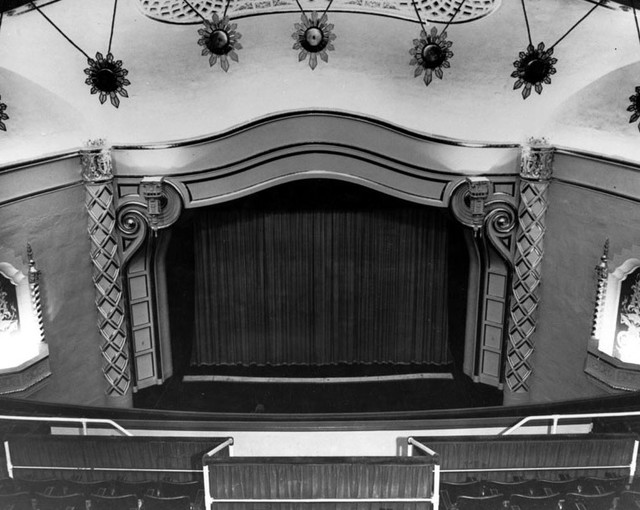 The West Coast Boulevard Theatre was a large neighborhood house with a stage and a Wurlitzer theatre organ. It opened on May 27, 1925 with Joe Weber & Lew Fields in “Friendly Enemies, plus on stage a Fanchon & Marco ‘Idea’ "Sally”.

In the 1950’s, the stage space was removed and made into offices for Fox West Coast Theatres, the chain that operated the Boulevard Theatre. Sadly, the organ was also removed.

This theatre was finally torn down in the mid-1980’s and the site is now part of a drug store.

Patrick, my brother and I remember your father (and you) when we lived on Will Rogers street.

I remember two brothers, first names Billy and Clark, who lived up the street. Would that be you? If not, please let me know who. You can email me at

I was born in 1945 and grew up in the neighborhood around Washington and Vermont. My father had a drugstore on the northeast corner. From the time I was five years old I spent a fair amount of my childhood in the Boulevard Theater, first going with my older brothers or my mother and later, by the time I was eight or nine, going by myself or with schoolmates and neighborhood friends. Saturdays at the Boulevard were a regular routine. The program started in the late morning with ads for local businesses, like the Gin Gin Inn (Chinese food), trailers (previews of coming attractions), ads for the snack counter, and numerous cartoons followed by a double feature. There were also special Friday the 13th late night â€œspook showsâ€ with mini-marathons of scary movies like The Creature from the Black Lagoon. I must have run into Pat Howard (ushering from 1952-57) numerous times but I donâ€™t think I knew him by name. There was another usher, Cody Fishburne, whom I knew because he was a friend of my brothers.

I appreciate Patâ€™s descriptions of the offices of Fox West Coast Theaters. While I never got to see them myself, my father occasionally played poker with Charles Skouras and his cronies in the penthouse. My dadâ€™s descriptions of the palatial layout were similar to Patâ€™s with added emphasis on the variety and quality of the food and refreshments served on those occasions. When the property was acquired by Thriftimart my father seems to have been â€œgrandfatheredâ€ in since he continued to play poker with the new management, headed by Roger Laverty.

West Coast Theaters were originally Gore Bros, who later partnered/sold out with Skouras and Fox – I can’t get the whole story straight. My mother cashiered at this theater probably in the mid thirties. Thriftimart was also Smart and Final – I rememer being in the offices and seeing a beautiful stairway going up and my dad telling me that my mom had worked there before marriage. My mom was a Gore and a niece of the “Gore Bros.”

My memory is fuzzy so this could be substantially wrong. But what I think I remember — I was a kid at the time — is that there were several theaters within a two block radius of Washington and Vermont — at least three — and the area seemed to be a wholesale film booking area with more company in the film distribution business or affiliated businesses. Of course, what seemed to be “more than one company” could have been various Fox West Coast offices in different buildings. In particular wasn’t there a theater in a huge building on the southeast corner of Washington and Vermont with the entrance on Washington? And wasn’t there a smaller theater on Vermont in the several blocks south of Washington?

Homeboy: You’re right about the area around Washington and Vermont having been the home of L.A.’s “Film Row” with a number of booking offices, but the only theater I recall in the immediate area was the Boulevard itself, and it was on the northwest corner.

The nearest theater on Vermont to the south was La Tosca, at 30th Street, and to the north there was the Fox Parisian, but that was all the way up at 8th Street.

The only cluster of three theaters close together that I recall on the south side was the one around Broadway and Manchester. The Manchester Theatre was the big one, just west of Broadway, and then there were the smaller Mecca and Mayfair Theatres, about a block apart on Broadway south of Manchester.

There were several more theaters on South Vermont, but they were all south of Exposition Park.

I don’t know if it was ever noted in the remarks, but the southwest corner of the building shown with the awnings enclosed the Fox West Cost corporate offices cafeteria. This was a restaurant strictly utilized by employees. I do not recall whether meals were free or not, more likely at reduced rates. A kitchen door opened into the Boulevard Theater lobby. I am sure my father, as the theater manager, took advantage of the back door access to food. I know he was on the best of terms with the cooks. There was not a lot of places to eat in the nearby neighborhood. Only the Gin Gin Inn Chinese restaurant across the street and maybe the drugstore on the corner.

Another observation for those that recall the Boulevard. The large openings on the west side of the theater were fire exits shown in the photo. Several doors in each allowed balcony customers by a long interior carpeted ramp and mezzanine customers directly to exit in the event of an emergency. The small door directly accessed the mezzanine level for similar purposes. Similar fire doors were on the east side that exited into an interior passageway which then passed to Vermont Avenue between small businesses the occupied the east side of the building.

Is it possible that the Boulevard Theater at some point was known as the “Inner City Theatre”? The ad at the link below has the Boulevard’s address at its bottom. The advertised film was released in 1971, but this showing could have been any time after that.

rdimucci: Yes, the Boulevard Theatre was the first home of the Inner City Cultural Center, from its founding in 1966 until 1972. The Center moved into the former Masonic Temple at 1308 S. New Hampshire Avenue in 1972 and acquired the Ivar Theatre in Hollywood in 1986.