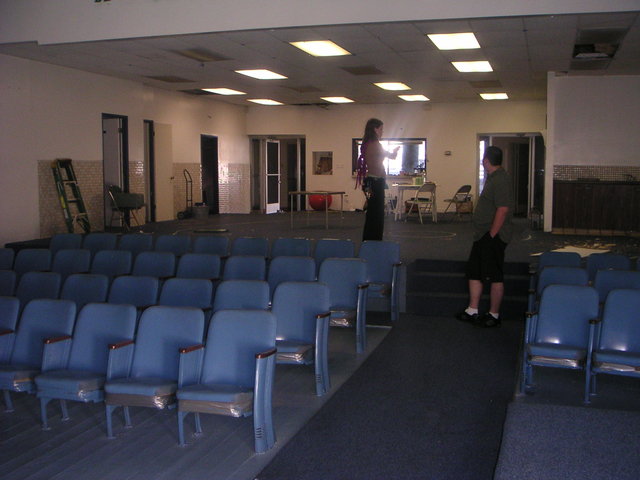 Built on the site and opened in 1921 as the Fairyland Theatre. It became the Union Square Theatre by 1929. In 1935 it became a live theatre named the Louise Glaum Little Theatre. By 1938 it had been renamed Continental Theatre and by 1942 it was the Union Theatre. Closed by 1956 when it became a union hall.

It lay empty for several years, until it was purchased by, and re-opened as the Velaslavasay Panorama in June 2005.

Panorama’s were an early form of entertainment which told a tale or decriptive narration, in the years before the movies were invented.

This is a nice little theater just south of the notorious Pico-Union area. There is a playhouse across the street, creating a mini-arts neighborhood.

A year before the Union was listed as the Continental in the city directory, so that should be an aka.

In conjunction with the imminent publication of his newest book, Arctic Spectacles: The Frozen North in Visual Culture 1818-1875, The Velaslavasay Panorama will host two nights of dramaturgic presentations and historical merriment by renowned arctic authority Professor Russell A. Potter. An exploration into 19th century arctic entertainments and representations in popular culture, this wonderfully detailed and handsomely illustrated new work explores the fascination the Frozen North has consistently held upon the public imagination.

Dr. Russell A. Potter has been fascinated with the Arctic for many years, and has written and lectured extensively on many different aspects of its recorded history. In April of 2004 he traveled to the remote corners of the Canadian Arctic to revisit several of the sites where traces of the ill-fated Franklin expedition of 1845 still remain, for the filming of the NOVA program Arctic Passage: Prisoners of the Ice. He lives in Providence, Rhode Island, and is currently Professor of English and Media Studies at Rhode Island College. For more information on his studies, please visit his website at www.arcticspectacles.info

The Velaslavasay Panorama, having recently opened its panoramic meditation on the arctic, the 360-degree exhibit Effulgence of the North, proves a perfect locale for this conversational convergence of modern and historical perspectives on the arctic. The facts and fictions of the controversial history surrounding these mythical frozen climes will be investigated with wit and the first-hand knowledge of the barren tundra which has been so long the focus of Professor Potter’s study. Join us for these exciting evenings of exploration and adventure, where there will also be provided an array of tasty and appropriate refreshments reminiscent of the time period, including our version of pemmican {a high-energy staple of any intrepid traveler’s diet, composed of dried and pressed meat, fruit, and rendered fat}, and delicious warm libations to ward off the chill of the Arctic night.

Shouldn’t the name of this theatre be changed here at CinemaTreasures?

Ron, the Union neon was restored, so the theater still carries that name. The Velaslavasay Panorama appears on the marquee, as if it was the featured program.

I’ve been unable to discover when it first closed as a movie theater, but in January, 1935, silent movie star Louise Glaum reopened the house as a live theater, the Louise Glaum Little Theatre of Union Square (oddly, the 1936 City Directory still listed the house under the category Motion Picture Theatres, as “Glaum Louise Playhouse.”) But by 1938, the house was listed as a motion picture theater called the Continental. It was still the Continental in the 1939 directory, but was the Union Theatre in the 1942 directory.

The next city directory available online is from 1956, by which time the theater had become the union hall of the tile worker’s local. It remained a building trades union hall at least into the 1980s.

A Fairlyland Theatre was mentioned in an August, 1915, Los Angeles Times item, when its location was given as 24th and Hoover. As this earlier Fairyland Theatre is not listed in the 1915 City Directory (it most likely opened after the directory for that year had been compiled), I don’t know if it was at the same address as the second Fairyland. The earlier Fairyland has a Cinema Treasures page. As it might have been at a different location, that page should probably remain for now. If it is eventually determined that it was in an earlier building on the same lot where the second Fairyland’s building was built in 1921, its existence can be noted in the description on this page, and the other page can be removed.