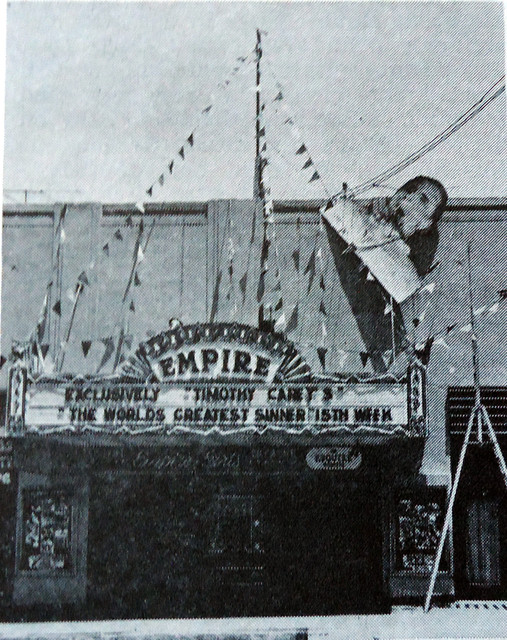 The 1967 Los Angeles yellow pages lists the Fiesta Theater at this address.

There’s some renovation going on. I wasn’t allowed in to look around.

The parcel profile report for this address from the L.A. city planning department gives a construction date of 1914 for the building now on the site. It doesn’t reveal whether the building was built specifically as a theatre or not.

I remember seeing the remake of DOA here in 1988. It was pretty rundown from what I remember.

Listed as the Empire Theatre in the 1929 Los Angeles City Directory, but with an address of 2129 W. Pico.

Migratory address? I think it’s probably so. The 1915 City Directory lists a Cate & Swann Theater at 2127 W. Pico. The 1914 building at that address probably was built as a theater.

The parcel on the corner of Pico and Lake is given a Lake Street address by the L.A. County Assessor’s office, and it too is occupied by a building erected in 1914, but from Ken’s photos and the Google Maps view, it looks like the Empire was in the building east of that, on the lot the Assessor’s office still lists as 2127 W. Pico. They give the 1914 building there an effectively built date of 1922, so the original theater was probably expanded at that time.

The theater was used for live performances in 1984, according to this LA Times item from September of that year:

Marga Lopez, Maria Teresa Rivas and Blanca Guerra will reprise their roles in â€œAusencia de Diosâ€, an abridged Spanish-language version of John Pielmeierâ€™s â€œAgnes of Godâ€ that will play additional performances today and Saturday at the Fiesta Theater, 2131 W. Pico. (387-8882).

Reopened as Fiesta on December 8th, 1976 with “Dharti Ma Chhoru” and “Arzoo”, both from India.