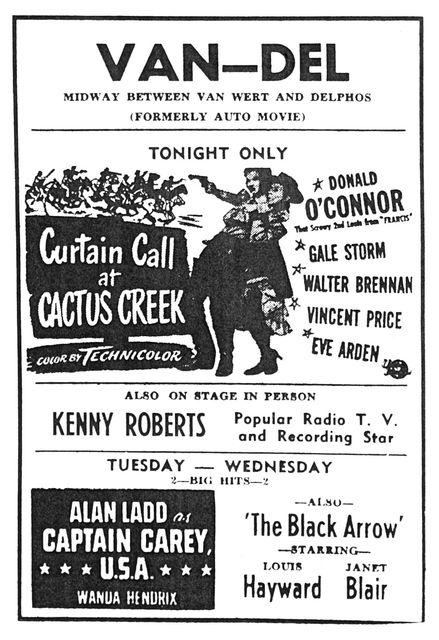 The Star Lite Drive-In opened on June 11, 1948, featuring the 1947 comedy “It Happened on Fifth Avenue” with Don DeFore, Victor Moore, Ann Harding and Charlie Ruggles. It was built by J.W. Christopher and C.N. Christopher from St. Mary’s OH. The theatre had a car capacity of 400 cars. On September 22, 1948 it was sold to Paul Staup (Staup Enterprises). On April 28, 1949, at the beginning of the new drive-in season it reopened as Staup’s Auto Movie. Changes made by Staup’s include replacing the screen tower with a wider screen, the old screen tower blew down in the winter time, and installing a playground for the children. Staup leased the theatre to Carl H. Schwyn/Jack Armstrong circuit, who were the theatre operator from August 1950 until 1954. Carl H. Schwyn/Jack Armstrong circuit was also operating Staup’s Springbrook Auto Movie in Lima, OH. On July 2, 1951, Staup’s Auto Movie was renamed the Van-Del Auto Movie.

One of the stunts that the Van-Del Drive-In featured in August of 1960 was to have a person hypnotized and buried for three days. They advertised in the local paper for someone to perform the feat. Phil Davis from Martinsville, IN. came forward to perform the stunt. He was hypnotized by ‘Dr. LeRoy’ and buried on Friday and dug out of his grave on Monday. Was he really buried there for three days? We will never know!

In April of 1967 Thomas Epps bought/leased the drive-in on a land contract from Staup Enterprises. On August 1, 1981 he was listed as the owner. Also in 1967, Epps remodelled the concession stand along with widening the screen tower and installing a new sound system. On September 4, 1998, Epps sold the Van-Del Drive-In and the Ridgeway Drive-In to Boyd Theatres: Jim and Joyce Boyd. Over the years the Boyd family has upgraded the Van-Del Drive-In with digital projection and has added two more screens to the drive-in.

The Theatre Catalogs assigned the drive-in to Delphos. George Christopher, Christoper Bros. were listed as the owner of the Starlite (capacity 350) in the 1948-49 edition. The 1949-50 edition had changed it to Staup Auto Theatre, capacity 300. By the 1952 edition, it was the Van Del, capacity 500.

Capacity numbers in the IMPAs jumped around from 350 to 536. The Van Del was listed in Delphos through 1984, then moved to Van Wert.