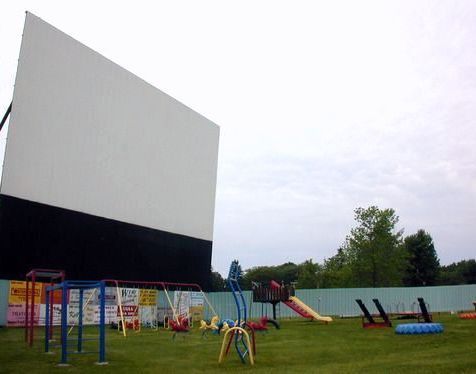 The Lincoln Drive-In opened on June 16, 1950, featuring the 1948 comedy “Scudda Hoo! Scudda Hay!” with June Haver, Lon McAllister and Walter Brennan. It also featured Marilyn Monroe’s earliest speaking role, a one-line bit part. It was opened by Walter Burget and Horace Shock. Shock owns and operates the Lima Drive-In, Sharon Drive-In and Gloria Drive-In in Lima, Ohio. Theatre Equipment Co. of Toledo (Albert Boudouris) was in charge of the construction of the open air theatre. It has a parking ramp that can hold 560 cars. Co-Op Theaters from Cleveland, Ohio, was the booking and buying agency. In February of 1953, Burget bought out Shock’s interest in the Lincoln Drive-In.

Burget leased the drive-in in November 22, 1955, to Selected Theatres Inc. (Sam and Nate Schultz) from Cleveland Ohio. He joined his old theatre partner Horace Shock in the development of new shopping centers in Lima, Ohio. Shock also had leased his Lima area drive-In theatres out to Selected Theatres in 1954. In March of 1959, Burget and with his son, Gail, returned to operating the Lincoln Drive-In. Apparently Burget did not like the way Selected Theatres was operating the Lincoln Drive-In. He commented “That a theatre must give its patrons the kind of entertainment they want, and he’s positive the people of Van Wert want family type of pictures, not sex exploitation screen fare and all night shows”. Burget started to do his own buying and booking of films. His son was in charge of theatre operations. After that they never ran triple features or dusk to dawn shows at the drive-in.

On July 12, 1966, a severe wind/rain storm blew down the screen tower. In October of 1966, Burget sold the drive-in to Earl Starner. Starner did not do anything with the property so the drive-in sat empty until 1971. In January of 1971, the drive-in was sold to Defiance Amusements/Jack Armstrong Circuit. The Lincoln Drive-In was rebuilt with a new screen tower, along with an updated concession stand and a new name Van Wert Drive-In. On June 26, 1971, the Van Wert Drive-In reopened featuring two Walt Disney movies, “The Barefoot Executive” and “Boatnik”. It was only advertised as the Van Wert Drive-In for a short period of time and it was renamed back to the Lincoln Drive-In.

Thomas Epps bought the drive-in on December of 1975, from the Jack Armstrong Circuit. He also was operating the Van Del Drive-In in Middle Point, Ohio. In May of 1976, Epps held a contest to rename the drive-in theatre. The winner was Donald Putt from Middle Point, Ohio. His entry was the Ridgeway Drive-In. Epps also noted that Tri-States Theatres Inc. from Cincinnati will be the film buyers and bookers. On September 4, 1998, Epps sold the Ridgeway Drive-In and the Van Del Drive-In to Boyd Theatres, Jim and Joyce Boyd. On November 10, 2002, a F4 tornado leveled the Lincoln Drive-In screen tower, concession stand and the Van Wert Cinema located next door to it. The Van Wert Cinemas was rebuilt two years later but the Ridgeway Drive-In was never rebuilt. It is now just an empty field and the only thing left standing is the box offices. Hopefully the Ridgeway/Lincoln Drive-In Theatre will be screening movies again someday!

kinda reminds you of twister!