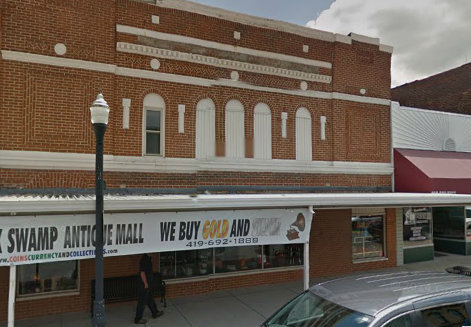 The Capitol Theater was in existence from 1922 until the early 1970’s, when it was purchased and refurbished. Spelling seems to vary between Capitol and Capital, unless there were two theaters with this name in Delphos.

The Capitol Theater was closed in the early-1970’s and was converted into a furniture showroom. They moved out of the building, and by 2007, it was sitting vacant.

And a picture of the theater’s organ on this page:
http://tinyurl.com/2gthrd

DELPHOS THEATRE NOT INVOLVED IN SUIT FILED (January 6, 1933)
A suit filed in Allen county common pleas court by the R. C. A. Phototone company against Ellsworth mentioned in the Herald Thursday, has no connection with the Capitol Theatre in Delphos, or its owner, F. H. Staup.
The suit concerns R. C. A. Phototone equipment purchased for the
Wauseon theatre which was later sold by Ellsworth and Paul Staup
with the understanding that the purchasers would assume the deferred
obligations, which they have failed to do. The suit has no connection
with the local theatre.

Capitol bought by Westrich Furniture in 1975 according to their website. http://www.westrichfurniture.com/aboutus.inc

On the evening of April 21, 1942, the Capitol Theatre is destroyed by 2 fires and an explosion. The Delphos Daily Herald reported that the first fire was caused by the projector which were showing a trailer for Gary Cooper in “Ball of Fire” prior to a double showing of “Bombay Clipper” and “Mr. and Mrs. North”. Which at that time, the screen flashed out when the film suddenly broke and a portion of broken pieces became lodged in the aperture plate of the projector. The intense heat from lamps caused the film to ignite and the fire was immediately transmitted to a reel of films on the rewind table, and the heat from the burning celluloid almost immediately broke the fusible links causing the fireproof doors on the film vault and projection port holes to close automatically. The second blaze was also discovered at the projection room which is used to store 7,000 feet of reel, and was destroyed during the blaze. 6,000 feet of both movies, and 1,000 feet of trailers, advertisements, local merchants, and snipes. The projectors and sound systems were also damaged by the fire. The cause of the blast is unknown, but it blew open the fireproof doors.