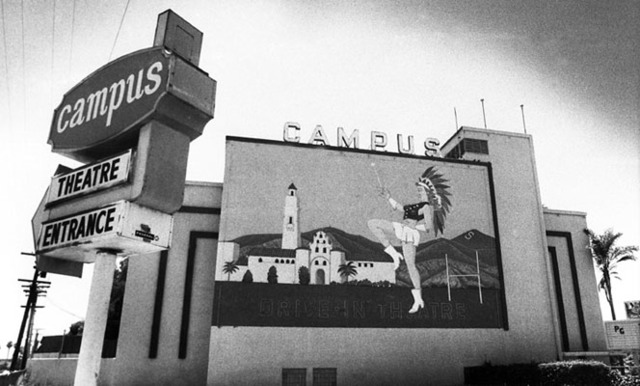 The Campus Drive-In was built in 1948, opening on August 18, 1948 with Dan Dailey in “Give My Regards to Broadway” & Richard Dix in “The Kansan”. It had a capacity for 900 cars. This drive-in closed around 1983 and was demolished. A shopping center was built on its former site.

Here’s an addition to the article excerpt above, about the killing that took place at the Campus in December 1961:

O'Connor’s father Jerome O'Connor spent so much time in courtrooms that he eventually became president of the San Diego Court Watchers Association.

In 1971, the murdered man’s sister, Maureen O'Connor, became the youngest person ever to be elected to the San Diego City Council. She was elected Mayor of San Diego in 1986.

The Reader just posted online a new draft of the complete San Diego drive-in history —– it’s more than twice the length of the original, with a lot of new information and something like 100 graphics that weren’t with the old article either ——

Save Our Heritage Organisation (SOHO) gained ownership of the Neon Majorette in 2001. Here is the most recent article about her published in SOHO’s Our Heritage Magazine: View link

Crying Shame this Drive-in could not be saved.

This opened on August 18th, 1948. The grand opening ad has been posted here.

Scroll down about one-quarter of the way down on this webpage to see some additional pictures of the Campus Drive-in.

The Campus Drive-In rated this page in Boxoffice of February 3, 1949. There are four photos. The Campus was designed by San Diego architect George Lykos.

Ha! I snuck in, or watch over the walls, many many times at the Campus Drive-In in the mid 70’s… we would ride our bikes from Del Cerro, and climb up on top of adjacent businesses' roofs, and drop over the wall, then crawl up to the seats in the unmaintained “kids play area” in the front part, right under the screen… the old wooden seats there were all covered with ivy, but it was a good place to hide, as long as you didn’t turn the sound up too high (there were speakers next to those ivy-covered seats!)… we sometimes even got the gall to go and buy a soda from the concession stand, once the movie had started! … the only problem was that people with little dogs would let them take a dump in the playground sand, so you had to watch it up there in the “free seating area”.

Closed in February 1983 with “The Dark crystal”, and “Dragonslayer”.