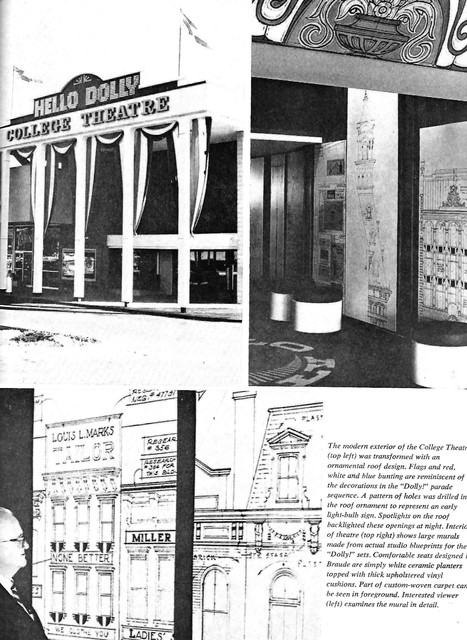 The College 4 started its life as a single-screen theater run by Statewide Theatres on December 22, 1965 with a gala premiere attended by numerous San Diego luminaries, including Chargers players Lance Alworth and Keith Lincoln, accompanied by ‘Ozzies’ Marching Charger Band. The first film it played, however, was “Pinocchio in Outer Space”. The selections gradually improved and over the next 12 years, it would serve as the first run venue for “Hello, Dolly”, “The French Connection”, and “Cabaret”.

In the Spring of 1977, the theater was divided into four auditoriums at the direction of Herb Krapsi. And it wasn’t done very well- what had been one of the finest theaters in San Diego was transformed into a trying affair where the sound transferred through walls into other theaters, the picture jumbled, and the slightest footsteps in the projection booth could be heard in the auditoriums. Additional problems resulted from the use of cheap technology and equipment with regards to sound and projection. Cheap platter systems (made of plastic instead of metal) resulted in warbling sounds and pictures. Despite this, the theater continued to serve the neighborhood and SDSU audience until 1994, when it was closed and turned over to commercial and retail interests.

In late-2007, it was demolished along with the surrounding strip mall which had sprung up beside it. As of this writing, the lot sits empty.

Trivia: The original Jack-in-the-Box restaurant was located right next to this theater.

Not the most impressive opening attraction, especially for a theater named College – and the film only ran 71 minutes.