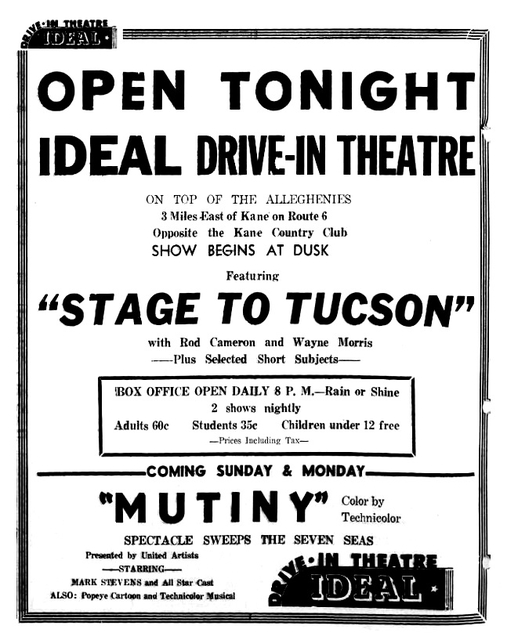 The Ideal Drive-In was opened in 1952. This single screen drive-in has a capacity for 348 cars. It later became the Family Drive-In.

I was told there was a downtown theatre in Kane. Does anyone know more about this one?

I actually live above the former Temple Movie Theatre. It is now a roller skating rink. The building was a Masonic lodge(3rd floor) and home to the KoC’s on the 2nd floor. The whole 2nd floor is now apartments.

Hi everyone. Just a quick update. The Family Drive-In in Kane Pa is under new ownership. It has converted to digital projection and its new website is www.kanefamilydrivein.com . The tripod web will eventually drop off before the beginning of the 2015 season. Thank you.

My conclusion is that this opened as the Ideal Drive-In in 1952, and became the Family Drive-In sometime around 1960, along with an ownership change, which was not uncommon.

From the Kane’s Our History page:

The Kane Family Drive In (originally called the “Ideal Drive In”) was built in 1952 by Clyde Piccirillo of Ridgway, PA. It was built for Joseph Farrell of St. Mary’s and Harold Prosser of Altoona. Waldemar Anderson, of Mt. Jewett, operated the Drive In until 1957, when it was sold to Clifford Brown and F.R. Holmes Poster Advertising Co. of Kane. At this time, it became known as the “Family Drive-In”. The theater was run by Lyle and R. Wayne Holmes. All buildings are original. One unique feature of the Kane Family Drive In is the 60 foot cement block screen, which is four stories tall and open on the inside.

In 1969, Fred Holmes became the projectionist for the theater. In 1983, Fred purchased the drive-in and continued to run it, along with his wife Mary and their daughter, son-in-law and grandchildren until 2014. The Drive In was Kane’s Business of the Year in 2011. In 2013, the Holmes family upgraded to a digital, high-definition projector, which has made movie viewing an even more exceptional experience. We feel very fortunate to have the opportunity to carry on Fred and Mary’s tradition of family entertainment. We hope that you will enjoy your time spent at this historic theater.

Note: That “we” belongs to Lowell and Jackie Watts, the current owners.

The March 5, 1954 edition of the Kane Republican had a short story about the sale of the Ideal to the W. E. Anderson Theatre Circuit, which had been operating theatres for 22 years in PA and NY.

The new owners announced that before the 1954 season started, “A new concession will be added, a modern playground, rides of all types, a new sign, (and) moonlight lighting.” Makes you wonder what the place looked like when it opened!

The April 14 edition, announcing the season opener, said that “Wally” Anderson had purchased the drive-in “last fall” and was renaming it the Family Drive-In. So the drive-in’s Our History page is wrong about how long it stayed Ideal.