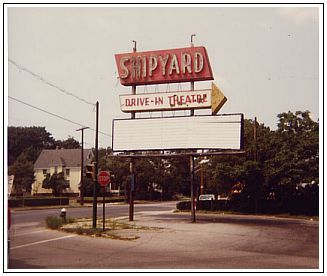 Located at the corner of Harbourside Boulevard and Shipyard Street. The Shipyard Drive-In opened in August 1957 and closed in 1976. This drive-in had a capacity for 1,700 cars.

I saw movies at the Shipyard (~1960-68) It was a great way for families to have a night out.. Just hang a speaker in your window and you were good to go.. Also in that same vicinity was the Atlantic Mills discount outlet, where we shopped every year getting ready for school.. A friend of mine and I, also frequented the Shipyard Ice Skating Rink every Saturday for a couple of years.

Years later (~1978), I worked at RI Imports (owned by Jake Kaplan) who either owned or leased the grounds of the old Shipyard Drive-In. We parked new imported cars (Nissan, Saab, Mitsubishi), driving up and down the rolling slopes which, years before, held carloads of families facing the big screen. The screen was still up when I worked down there.

Lost Memory’s image references in Feb 2005, have changed slightly.. Everything is the same except lead the number with a zero.. e.g. “ritship12.jpg” is now “ritship012.jpg”

Item announcing the recently opened Shipyard Drive-In, including the promotion for the new theatre, in Boxoffice magazine, August 17, 1957.
View link

Maybe I’m off my rocker, but looking at the current Google Map would suggest the layout of the area has changed some. If you search for 134 Harborside Avenue, and drop the Street View marker at the corner of Shipyard Street & Harborside Avenue, you can see the former field. Maybe Allens Avenue ran there at one point…but not anymore. Just my two cents on it.

Not much left – just the faint impression of the rows. And I know it’s the right location because I compared with Lost’s satellite image – the bends in the riverbank match.

I would love to hear of any insights on the concert by IRON BUTTERFLY at the Shipyard. I have a nice print of the poster, made by the mad peck.

Does anyone have any other pictures of this drive-in ?

Ken (from the West Coast -are you still out there)

Yes Dchad this is Ken, I’m still here but for some reason your Cox email kept bouncing, no more pictures of the Shipyard, I did locate the Manager Earl Clancy who I worked for back in the late 60’s he has no pictures of the Drive-in, wish I could find a picture of the screen, email me, Ken

To Elevatortribe, The Iron Buttterfy Concert atthe Shipyard never happened, it was cancelled at the last minute, I recall it was scheduled in May of 1971 I left R I in June of 1971, maybe the concert was rescheduled? I recall us all getting ready for it, D J Mike Sands from WICE Radio was going to host it, hope this bit of info helps Ken

Home movie of the Shipyard in 1963. https://www.youtube.com/watch?v=hD5jJ3QmSKQ