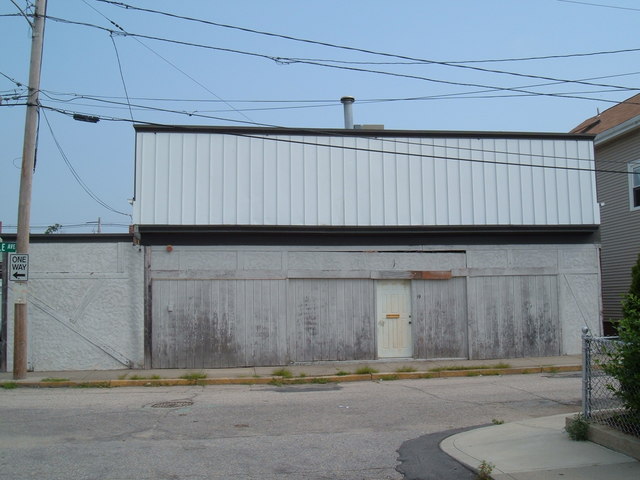 The Odeon Theatre was opened by 1922. By 1941 it had been renamed Lyric Theatre. This small neighborhood theatre on a side street in the Riverside section of East Providence had a very plain interior and no lobby. I remember that the walls had a couple of reproductions of portraits by R.I.’s Gilbert Stuart, the artist who did portraits of George Washington.

It was renamed Gilbert Stuart Theatre on October 11, 1953 and CinemaScope movies were well-served here because the wideness of the auditorium allowed for an impressively wide screen. I remember seeing the boy-loves-bull film “The Brave One” here when I was in high school. Low-priced double bills were the policy here. The theatre closed in the early-1980’s and is now a kind of warehouse/garage.

Thanks for the link. I guess I probably spent about seven years going to the Lyric, mostly to 20Â¢ Saturday double-feature matinees. Shortly after it evolved into the Gilbert Stuart I became involved with other things on weekends and lost interest in those matinees.

Hurricane is no hindrance!
Item in Boxoffice magazine, October 2, 1954:
“Although hurricanes demolished 150 homes in nearby Riverside, Joe Jarvis kept his Gilbert Stuart Playhouse in almost continuous operation. It was stilled only during a temporary power loss.”

Advertising method:
Earlier item from June 5, 1954:
“Joe Jarvis, owner-operator of the Gilbert Stuart Theatre in adjoining Riverside, has adopted a unique style of advertising pictures. While he uses only limited space, he devotes 50 per cent of his newspaper advertising to condensed editorial comments on either the stars appearing in the current attractions or on some outstanding feature of the film. Written in a smooth, easy, and friendly style, the copy is doing much to attract extra patronage.”

I lived in Riverside during Hurricane Carol in 1954. There wasn’t that much damage in Riverside Square where the theater was located. Most of the homes lost were coastal homes in the southern “Terrace” section of the town, including the last of the Victorian-era vacation homes that had survived the 1939 hurricane.
I don’t remember any Gilbert Stuart newspaper ads other than the typical small daily ones. I must have missed the more extensive ones with narrative as described in your reference. Riverside was such a compact community that one could easily drive by the theater to check out the coming attraction posters outside and the news spread by word of mouth.

I lived then and now in Johnston, and I often checked out the ads for all the area theatres. I went to the Gilbert Stuart many times, because they often showed what I wanted to see. I do remember those “folksy” ones that ran for a time in the Providence Journal.

The Providence Journal-Bulletin apologizes to the Gilbert Stuart. From Boxoffice magazine, August 17, 1964:

In a series of articles, published in the Providence Journal- Bulletin, dealing with the “demise” of business in the Riverside section of adjoining East Providence, it was stated “there used to be a movie house in Riverside.” Hardly before the ink was dry or the presses cold, Harry Horton, owner-operator of the cozy, well-operated Gilbert Stuart Playhouse in Riverside quickly protested that the Providence newspaper had made a grievous error—-there still WAS a motion picture theatre in Riverside! The newspaper editor was forced to acknowledge the mistake and apologize to the theatre and community for “belittling” the well-patronized movie house.

I remember the Gilbert Stuart Cinema well. I grew up in Riverside in the 60’s and spent time at the cinema, Crescent Park, the bowling alley on Turner Ave…….So many great memories. By the way, does anyone know what the name of the bowling alley was? I’ve asked an awful lot of people who lived in the area, and no one seems to remember.

I believe it was the Riverside Recreation Center or something similar. As a kid, I used to bowl there on Saturdays when a “string” was ten cents.

This theatre was part of the September 1923 6th Paramount Week. In this advertisement from the (Providence) Evening Tribune, September 1, 1923, we see a fascinating list of Rhode Island area theatres, many long-gone and long-forgoten, or even unheard of, as well as what they were showing during that week. This theatre was then called the Odeon. CLICK HERE and move image to see all theatres.

In September 1922 this theatre was part of Rhode Islandâ€™s Paramount Week. Click to see the ad in Providence News, September 1, 1922, which contains a list of all participating theatres as well as the films shown that week. This theatre was called the Odeon at that time.

The Lyric Theatre became the Gilbert Stuart Theatre on October 11, 1953.