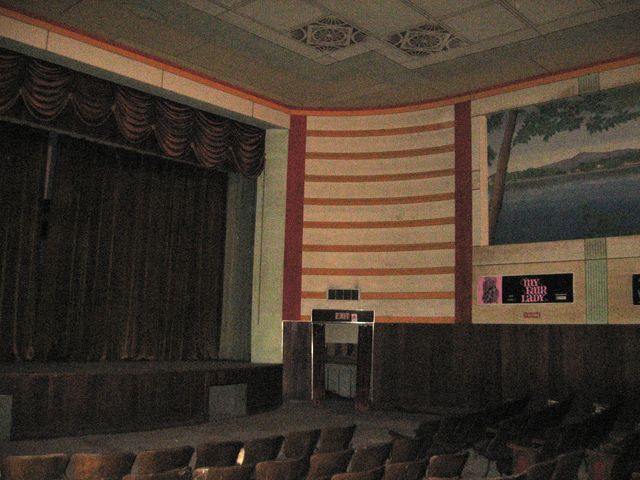 This classic Art Deco showplace first opened its doors on Main Street in Jaffrey, located in the southwestern corner in the Monadnock Region of New Hampshire in 1929. For almost fifty years it operated as a movie house, occasionally presenting vaudeville acts that traveled to the area and beyond from Boston.

Featuring four WPA (Works Progress Administration) murals painted in 1940 - the Four Seasons of Mt. Monadnock as seen from each town surrounding the Mountain - and boasting superb sight lines and acoustics, this gem of a theatre lies in waiting to entertain us, after 29 years in darkness.

While closed since the mid-1970’s, the original ticket booth, poster cases and Art Deco doors, above which is a frieze of black Italian marble, are all intact. The current owners, who operate a bike shop on the premises, are planning to retire and have entered into an agreement with The Park Theatre Committee, which is dedicated to restoring and reopening this historic venue.

Speaking of movie history, it was at the Park Theatre in the summer of 1952 where I saw “King Kong” for the first time in one of its many reissues by RKO. Needless to say, it is an event that made a lasting impression on me.

The Park Theatre was the brainchild of Romolo Vanni, who was born in Italy in 1885, emigrating to the United States in 1899. In 1912, at the age of 27, he made his first real estate purchase in Jaffrey. Volume II of the Town History describes him as “a man of unusual business ability and enterprise.”

It was in 1915 that Mr. Vanni purchased the property on Main Street, the present location of the Park Theatre, which he built in 1929. In addition to using this address as his residence, he believed in diversification, opening a store specializing in fruits and vegetables on the site. In addition, he raised chickens in a building beside the theatre, and was well known for his vintage wine, which he produced in his basement. Theatre patrons of the time recall enjoying the aroma of fermenting grapes while they were attending a movie.

Much has been accomplished and more needs to be done if the arc lamps are to be lit again in this historic theatre, which entertained the surrounding communities in the region for decades. Once restored, the 600-seat 1929 movie house will be operated as a nonprofit entity and will become the venue for first run movies, professional and locally produced plays, concerts, school and college productions, town meetings and more.

The Park Theatre was demolished in late-2013, with a view to build a new Park Theatre on the site. It was opened on August 5, 2021 and has its own page on Cinema T-reasures.

Contributed by Michael B. King
Get Movie Tickets & Showtimes

I think this would be the official website:
http://www.theparktheatre.org/

The Park is open. Last year they were showing movies in the summer and also putting on stage plays.
http://tinyurl.com/bdc2ko

Here is an April 2004 article about Team Jaffrey:
http://tinyurl.com/dbzvlk

Glad to hear that another movie theatre is set to be restored and re-opened.

This building has been recently demolished. Demolition videos are available to view on the website http://www.theparktheatre.org. Fortunately the demolition of this building is for a good cause, as the land will be used for another Park Theatre.

Wish you could have saved some of the old theater… Relics are important too.

The Theatre Historical Society archive has the MGM Theatre Report for the Park; it’s Card # 489. Address is Main Street in “Jaffey NH”. There is an exterior photo taken March 1941. Condition is Good. The report says the Park opened in 1929, shows MGM films, and has 439 main floor seats and 100 in the balcony. The 1940 population was 2,800.