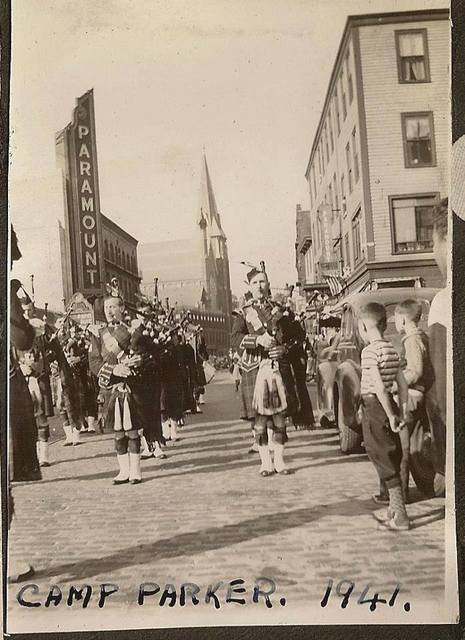 The Paramount Theatre’s Art Deco style facade was nearly identical to the original exterior of the Gateway Theatre in Chicago. It was also similar to that of the Warner Theatre in West Chester, Pennsylvania. All of these theatres were completed in 1930.

..any info..pics..anything out there related to Lynn’s Paramount?

The MGM Theatre Photograph and Report form for the Paramount in Lynn has a facade photo taken in May 1941. There is a vertical sign and a fancy marquee similar to that of the Paramount in Boston. Attractions are Crosby and Hope in “Road to Zanzibar” and Ann Sothern and Lew Ayers in what looks something like “Maisie Was a Lady”. The Report states that the theatre was on Union St. at Birchstead Street,that it had been a MGM customer for over 10 years; that it was over 15 years old; that it was in Good condition, and that it had 2051 seats on the orchestra floor and 474 balcony seats, total: 2525 seats. The Report also states that competing theatres to the Paramount were the Warner Th. and the Capitol Th. The population in Lynn in 1940 was 98,100.

According to the Lynn Item of February 17, 1972 the Paramount opened in 1931 and closed on December 1, 1963 and was demolished in January 1964. It was reported to be the largest motion picture theatre north of Boston.