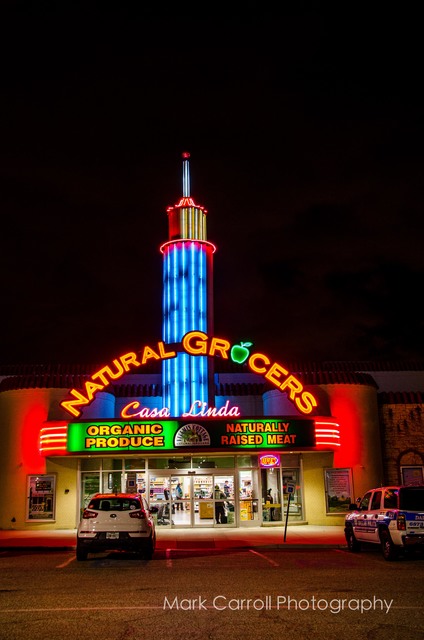 Opened in 1945, the Casa Linda Theatre was the second theatre in the United States to be built as an integrated part of a shopping center, a novel idea at the time. It followed another Dallas area theatre, which was the first such theatre to be constructed.

The theatre was built and operated by B.R. McLendon, father of the legendary radio pioneer Gordon McLendon (the great Scotsman) who because famous for his re-enactments of baseball games, theatre holdings, movie production, real estate holdings, and precious metals holdings.

The Casa Linda Theatre was the first portion of the shopping center to be built. Due to the shortage of building materials during and following the Second World War, construction of the theatre took nearly five years.

The theatre closed in early-1999 when its lease expired. The building had been sold to a potential real estate developer who later reneged on their offer to buy the theatre.

Over the next two years, two other potential buyers backed out of their plans to buy the property (and the Casa Linda).

From April 2011 as the theatre was being remodeled as a grocery store.

Of course like most theaters in the old days, it originally had one very large screen.

I managed the Casa Linda in the early 1990s. it was a very nice theatre that had been “modernized” a few times. The balcony had been converted to a theatre, and it was the best done conversion I had ever seen. In fact that auditorium had the best seats, and the best screen presentation in the place. The big main auditorium had older more basic seating that was too close together. We sacrificed quite a few rows of seats, giving more room between rows, and it made watching a movie in that auditorium much more enjoyable. Both the balcony theatre, and the main auditorium had traveler curtains on the screens. They both had electrically operated masking, too.

There were two small auditoriums that were made from what was originally storage space. One was converted well, with a nice ramp for the seating, giving a nice viewing position. The other had a basically flat floor making it tough to see the screen well if somebody in front of you was tall.

The front sign said “McLendon 3 Theatres” even though we had four screens because the city of Dallas wouldn’t let us change the signage because it was considered historic!

This information is incorrect. The theater and entire Casa Linda Shopping Center was developed by Carl and Howard Brown. They also owned the land as well as developed Casa Linda Estates.

My Father, Howard D. Brown and Carl Martin Brown, my Grandfather owned all the land that was to become Casa Linda Plaza and Casa Linda Estates from before WW2. They had to put in water, electricity and sewer before roads or the shopping center could be started. Barton Mc Lendon was a local attorney and he agreed to lease the theater if they built it and Bart agreed to have his son Gordon over see the management. When the war broke out Dad enlisted in the Army and materials were in short supply so everything was put on hold till the war ended.

Once Dad came home from the war, the Plaza and houses began in earnest and they were on their way. I remember the theater as being a great place to go on Saturday mornings or Friday or Saturday night with my friends as I became a teen. As my family died out, the center was sold by my father in total and Dad retired in 1978. In 1981 Dad died with the Plaza and all the homes he build in Casa Linda area and Garland still being there and to this day the Brown Family legacy lives on in what my Dad and Grandfather dreamed and accomplished.
McLendon lease on the theater was up in the late 1990' s and the theater is now a food store.

I briefly worked at this theater as assistant manager from July 93 until December 93. And replaced the above Jim Miller as Manager when he left for the West End. After being rudely fired for no reason. I then got hired on back with UA at the Northstar in Garland. Hey Jim. You ever figure out how to pronounce “viscount”? Only new you for a short time. Glad to have met you.

My Dad, Bill Sims, worked for Rob and Rowley Theaters back in the 40’s and early 50’s as a Film Broker. He booked many a picture at the Casa Linda Theater. We lived in the Casa Linda Estates most of my life. What a great place to live. The Browns were good friends with my Dad. I commend the Brown family for making a very nice addition, it was a real asset for the City of Dallas. Thank you. Jay Sims, Amarillo, TX.

A sad note.. Richard (Rich) Peterson, who managed the Astro & the Casa Linda Theatre (Dallas Tx) passed away on May 24 2019. Rich was a super nice guy. I first met him during the demolishing of the Astro & closing of the Casa Linda. We’ve stayed in touch on & off ever since. I’m very saddened. Rich battled stage 4 cancer for 13 months, fighting all the way. He was a trouper! Rich will be missed by so many………… R.I.P. my friend.. I’ll remember our IHOP get togethers fondly..