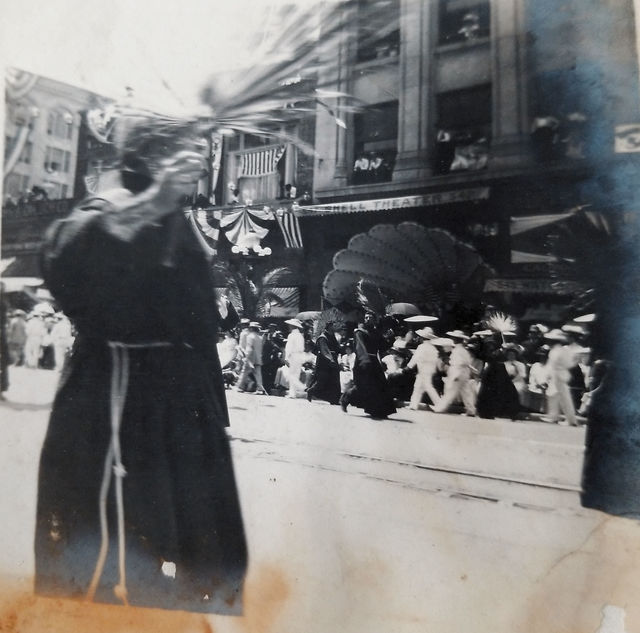 This early theatre was first operated by Samuel Stutz in 1909. It was taken over by William H. ‘Billy’ Clune who also operated Clune’s Broadway Theatre (now the closed Cameo Theatre) on the other side of S. Broadway. It opened in August 1914 as Clune’s Exclusive Theatre, and it catered for an audience of women & children only.

This must have closed as the Shell Theatre prior to 1941 as there is no listing in Film Daily Yearbooks of this theatre after that edition.

The building currently on the site is in retail use as a jeans store.

Actually, the jeans stores are to the left and right of this address. 547 S. Broadway is now Sassy Perfume. I wonder if they carry “hot butter” fragrance.

The 1915 Los Angeles City Directory lists a Clune’s Theatre at 547 S. Broadway, but it isn’t there in the 1923 directory. The Jeans store is in the building Sid Grauman built to provide a Broadway entrance to the Metropolitan Theatre in 1923. The Shell Theatre would have been in the building just north of it, which the Assessor’s office says was built in 1901, with an effectively built date of 1935.

So far I’ve been unable to discover if the Shell was a storefront conversion, or if there had been a live theater at this address in 1901 and it became a movie house. As the directory for 1923 has no theater listed at the Shell’s address, it must have been gone by then. 547 S. Broadway housed a millinery company in 1923.

In any case, the 1901 building that includes this address is still standing, though it’s likely that no trace of its former theatrical use remains.