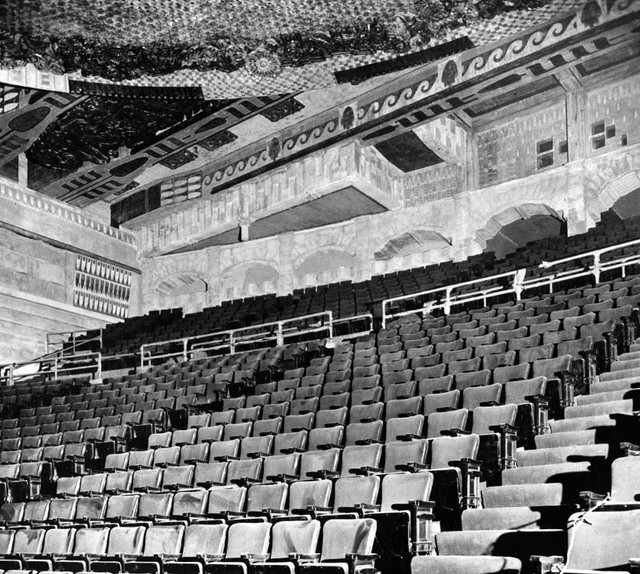 Opened as Grauman’s Metropolitan Theatre on January 26, 1923 with Gloria Swanson appearing ‘in person’ for the premiere of her film “My American Wife”. On stage was an ‘all-star’ Grauman prologue with Fred Waring and his Pennsylvanian Orchestra and three vaudeville acts. It was said that 30,000 fans had fought outside to buy the $5.00 tickets and the surrounding streets were blocked in all directions. Grauman’s Metropolitan Theatre was the largest movie theatre in Los Angeles for many years. Not only did it have one of the largest balconies ever built, its projector had the longest projection throw in the city. It was equipped with a Wurlitzer 4 manual/23 ranks organ which was opened by organist Henry Murtagh. The theatre was designed by architect William Lee Woolett, while the 5-storied office building surrounding it was by architect Edwin Bergstrom (originally planned as a 13-story office building). Rather than use plaster decorations, pre-cast concrete was used, with only the 90ft circular auditorium ceiling grill in plaster. There were originally two entrances, the main one on W. 6th Street and another on Hill Street, later a third entrance on S. Broadway was added, but this was closed off in 1929 and is the only part of the theatre still standing today.

It was acquired by the Publix Theatres Corporation chain in July 1924, and the theatre was renamed the Paramount Theatre on January 24, 1929. To help distinguish it from other Paramount theatres in LA, the theatre was also known as the Paramount Downtown Theatre. Operated by Fanchon & Marco, it was taken over by Cabart Theaters Corp by 1950. United Paramount Theatres took over on March 18, 1952. Later in 1952 they ‘modernised’ the theatre when it received a new marquee and the lobby’s were altered, reopening on May 29, 1952 with Alan Ladd in “Red Mountain”.

In 1960, the Paramount Downtown Theatre was closed and in 1962 it was torn down to make way for a parking lot. In the early-1980’s a 16 floor tower was was built on this same lot which contains the International Jewellery Center.

Today, if one stands in front of the Arcade Theatre on S. Broadway and look southwest towards the corner of S. Broadway and 6th Street, near the second or third building from the corner, you will see a faded sign for the old Paramount Downtown Theatre, the only trace of the theatre still visible on what was its short lived S. Broadway entrance.

If I had even a little bit of Warren Buffet-style money, after I’d tended to some charities, I’d locate the blueprints of Grauman’s Metropolitan (they must exist somewhere!) and have it rebuilt in its original form. And most importantly, in a location where it would never be wrecked by alteration or demolition. This house is one of the most unique in the world, right up there with Radio City, the NY Roxy, the UA in LA, and the Shrine Auditorium. Maybe I’ll give Mr. Buffet a call…

There are a few errors in our description of the Paramount. First, though the foundations of the Metropolitan were designed to carry a 13-floor, height limit building, only five floors of offices were ever built above the ground floor.

Third, though the Paramount closed in 1960, it was not demolished until 1962. During its last two years it sported a billboard touting the 35-story office building which had been planned for the site. The office building project fell through, and this was rumored to have been, at least in part, due to the unexpectedly high cost of demolishing what had probably been the most substantial theater building ever erected in Los Angeles.

Fourth, the building now on the site is not a bank, but the International Jewelry Center, a 16-floor tower built in 1981 for the wholesale and retail jewelry trade. The jewelry trade has gradually taken over several blocks along Hill Street, including the former Warner Bros. Downtown Theatre at Seventh and Hill. It’s unfortunate that the jewelers didn’t come along a few years earlier. They might have saved the Paramount’s building as they did the Warner’s.

Story about the life and death of the Paramount. http://southonspring.com/paramount-theater-downtown/

Wow! in that article there is a photo of what must have been the Lobby with a sphinx that makes it look like the lobby of a grand art museum or public library.

The sphinx stair decoration was in the Broadway entrance to the building. The building it was in is still standing, but the entrance was closed in 1929 and the space converted to a retail store. I have no idea what became of that sphinx.

F&M’s lease on the Hollywood Paramount continued, and though now under separate management, the day-and-date policy at the two houses would also continue. The first movie opened under the new regime was the Paramount release “Something to Live For,” on March 21. 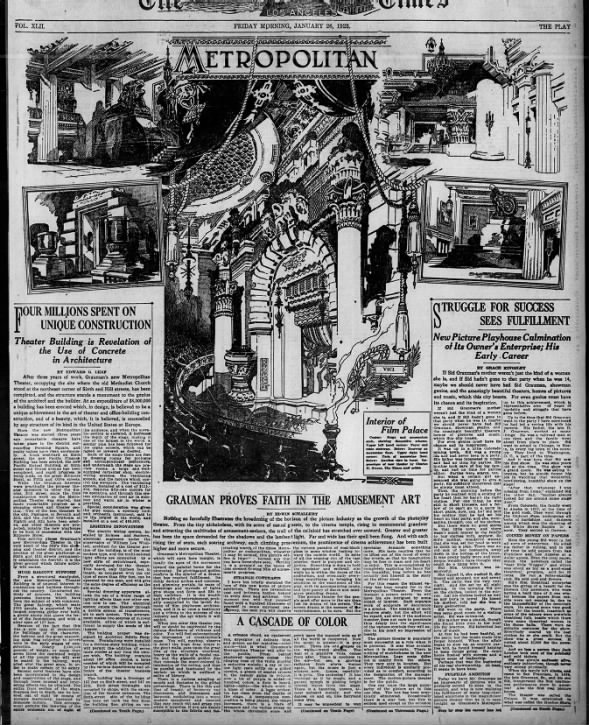 The Paramount theatre held a reopening on May 29th, 1952. Free parking or transit was offered. Grand opening ads posted.