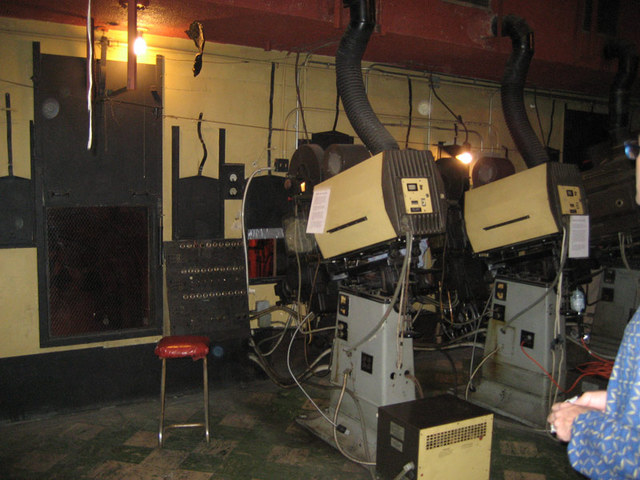 The Los Angeles Theatre is one of the crown jewels of the downtown Los Angeles corridor of fantasy that is the S. Broadway Theatre District. Built by independent exhibitor H.L. Gumbiner who built the Tower Theatre in 1927. Flushed with the success of his Tower Theatre he set off with his preferred architect Simeon Charles Lee on a tour of movie palaces around the country, as he planned to build ‘the most lavish movie palace that downtown Los Angles would ever see’. Their first stop was the ‘fabulous’ Fox Theatre, San Francisco which had been designed by architect Thomas Lamb in 1929, and they decided there and then that Los Angeles would have a theatre to equal it, although the site limitations of South Broadway meant that the Los Angeles Theatre would be only half the size of the Fox Theatre, San Francisco. Rather surprisingly, it was decided to style the theatre in a French Baroque style popular during the 1920’s, but by 1930 was looking a little ‘old fashioned’, as Art Deco Moderne styles were becoming all the rage in theatre design as witnessed at the Hollywood Pantages Theatre and the soon to be completed Warner Western Theatre (now Wiltern Theatre). Often viewed as the greatest movie palace to be built in Los Angeles, the theatre was constructed in just five months!

The exuberant façade is highly decorated with twin Corinthian columns with moulded stonework and an empty niche in the center, outside which hang the original large vertical sign bearing the theatres' name. This façade is flanked on each side by single storey retail units faced with elaborate detailing. A large highly decorated Bronze marquee hung over the sidewalk (this was replaced in the 1940’s by the current ‘bull-nose’ design which is still in place today, sans the clock on the upper front section) Today also we see the right hand flank of retail units have had their decorations rendered over in cement, giving an unbalanced look to the building. On the sidewalk under the marquee a terrazzo floor in the pattern of an Aubusson carpet extends from the entrance doors to the curb-side. In this open outer lobby area there is a large central pay-box, the walls are finished in Red Verona marble and the original heavy Brass ornamental doors were replaced in the 1970’s. For the convenience of patrons, two loudspeakers were mounted on top of the pay-box relaying the soundtrack of the movie playing inside the theatre, and there was a unit in the wall that indicated the temperature within the theatre.

There is no vestibule, so passing through the entrance doors, patrons are immediately in the grand lobby. Decorated in a French Baroque style fashioned after the Palace of Versailles near Paris, France, both side-walls are mirrored set within pillared recesses and the ceiling is decorated with cast plaster coffered shapes down the center of which hand three large French chandeliers. Immediately above the entrance doors is a huge sunburst effect symbolizing Louis XIV the Sun King, and at the other end of the lobby is the grand staircase leading to the balconies. On the landing between the lobby and the mezzanine is a large crystal fountain feature behind which is an oil painting ‘after Fragonard’ by interior designer Anthony B. Heinsbergen. Passing through the draped arches leads into the mezzanine lobby which has a room at each end, one a soundproof children’s crying room, the other a smoking room, both having large windows so that patrons inside can view the theatre auditorium beyond.

Seating in the auditorium is arranged on three levels, the orchestra level has raised loge seating on the sides, the first mezzanine is set well back from the proscenium and has a series of five stepped boxes extending down the side-walls. The upper balcony is set even further back, creating very little overhang. An innovation for its time was the strips of blue neon tubing which ran under the floor down the aisles to guide patrons in the dark. All the seats in the theatre were wired to an electric indicator to monitor the available seats to the pay-box out front. Five elaborate recessed arches decorate the side-walls, above which is a deeply coffered ceiling which extends up to the main central ceiling dome which has tromp l'oeil oil paintings as a decoration

The 65ft wide rounded proscenium arch has columned organ grilles on either side and curtain swags into which are woven the crest of Los Angeles in the center. These are original to the building, although the side drapes in the proscenium were shortened when CinemaScope was installed in the 1950’s. The original main house curtain survives, and is woven like a tapestry with gold and silver threads, all mounted on a massive wooden frame. The design depicts the Royal Court of King Louis XIV with its carriage against a rural landscape complete with a huge triumphal arch. Beyond the house curtain was the title curtain of electric blue velvet with designs in silver beads. The stage is 27ft deep and only the forward portion is rigged to allow for the front curtains and screen to fly up into the stage house. The Los Angeles Theatre was equipped with a small Wurlitzer 2 Manual/10 Ranks theatre organ which had been transferred from the Tower Theatre. In reality it was not large enough for this theatre, but considering that by the time the Los Angeles Theatre opened in 1931, ‘talkies’ had arrived and organs were generally no longer being installed, but it was considered an asset to have an organ installed here.

Considering the rather small seating capacity of the Los Angeles Theatre compared to other major downtown theatres, it was equipped with the most lavish waiting areas, which are located underneath almost the entire structure. Descending a single staircase under the grand staircase is an intermediate lounge which has a coat check and manager’s offices. From there a pair of staircases leads to the basement foyer which also serves as the gentleman’s lounge. Down a further five steps leads into the huge oval lounge which is located under the orchestra seating area. This room is panelled in walnut and has a back-lit frosted glass ring in the ceiling, reminiscent of a state room in an ocean liner. Several novel features were provided in this room: built-in electric cigarette lighters being one, but the main novelty is an alcove on one wall which has a 6ft glass screen inserted. On this screen, patrons waiting in the lounge could actually view and hear the movie being presented on the screen in the auditorium above. This was achieved via a series of mirrors and a long tube from the projection booth high above the upper balcony (In recent years this screen has been boarded over). The original carpet in this lounge is the only one to survive the 1960’s re-carpeting of the theatre. Off the main lounge are the gentlemen’s rest rooms, the ladies powder room and rest rooms (with sixteen stalls in various shades of marble), a children’s playroom and a restaurant and kitchens.

The Los Angeles Theatre was opened January 30, 1931 with a star studded world premiere of Charlie Chaplin’s “City Lights” (his latest silent movie - with music and sound effects). Among the guests attending the first night were: Professor & Mrs. Albert Einstein, King Vidor, Cecile B. DeMille, Darryl F. Zanuck, Hedda Hopper, Marion Davies and Gloria Swanson. A crowd of 25,000 fans gathered outside the theatre. But this was not a good time to build or even open a lavish movie palace, as America was in the middle of the Great Depression and H.L. Gumbiner had outstretched himself building it. Because he was an independent exhibitor, he had problems obtaining the best movies, and the Los Angeles Theatre was closed in December 1931. It remained dark for many months during the Depression and he relinquished his lease to Fox West Coast Theatres who ran it for a time as a 2nd run movie theatre. From the 1940’s it was taken over by Loew’s Inc. who played their first run MGM movies at the theatre. Metropolitan Theatres took over in the 1960’s, playing general release movies in English with Spanish sub-titles from April 3, 1976, later changing to general release movies dubbed into Spanish. The Wurlitzer organ was used for occasional concerts in the 1960’s, but it quietly ‘disappeared’ from the theatre in the 1970’s (the same time that the State Theatre organ also went ‘missing’).

The Los Angeles Theatre had one ‘special’ occasion on 4th December 1992 when the theatre played host to a gala press and industry screening of Tri-Stars biopic “Chaplin” directed by Richard Attenborough and starring Robert Downey Jr. as Charlie Chaplin. Over 1,400 guests attended, including Chaplin’s daughter Geraldine Chaplin and his second wife Lita Grey. The producers had selected the Los Angeles Theatre because Charlie Chaplin had chosen it to premiere “City Lights” at its inauguration. For the event 100 volunteers were called in to spruce up the theatre. The Los Angeles Theatre was closed as a movie theatre April 28, 1994.

The theatre was then ‘mothballed’ and has been used once a year as one of the venues for screening a classic movie for the “Last Remaining Seats” event held each summer, which gives the general public a rare chance to see inside the theatre. For the remainder of the year this palatial structure is now rented by movie studios for film shoots. These have included: Lisa Minnelli “New York New York” where the downstairs lounge doubled for a hotel lobby. Donald Sutherland in “Alex in Wonderland” where the entire opening sequence was filmed in the theatre. It has also been used as location for “W.C. Fields and Me”, “Hold That Ghost”, “Batman II”, “Mr. Wrong”, “Escape From LA”, “Man on the Moon”, “End of Days” and the TV movie “Alien Nation:Millennium” The theatre has also been used for innumerable commercials, music videos. In 2001 the owners proposed plans to convert it into a jewellery market place (like the nearby former Warner Downtown Theatre), but this plan was rejected. In April 2002 another proposal was to restore and convert into a Latino live stage show venue with occasional film use, but this never happened.

The Los Angeles Theatre is designated a Historic-Cultural Monument and is on the National Register of Historic Places with Landmark Status.

Oh Im sorry I missed it. I’ll have to try and catch it if they ever repeat it.

Last night’s ABC TV Agent Carter has scenes filmed in the Los Angeles Theatre, depicting it as a movie theater.

Another chase scene whizzing past the Los Angeles is in the 1972 adaptation of Joseph Wambaugh’s book THE NEW CENTURIONS, when Stacy Keach is hanging from the driver’s side door of a moving car. More “Adult Entertainment” fare appears to have been featured at that time: the 1968 British “X-Certificate” import BABY LOVE, and future SNL contributor Nelson Lyon’s experimental film TELEPHONE BOOK.

Just added a 1938 shot in Photos of the marquee with a Los Angeles streetcar framing the picture.

Used in the music video for Jaded(Aerosmith).

What is up with the reno’s that are going on right now? I hope nothing too major?

The Los Angeles theatre started its Spanish-language policy on April 3rd, 1976 with “Jaws” and “High Plains Drifter” with subtitles.