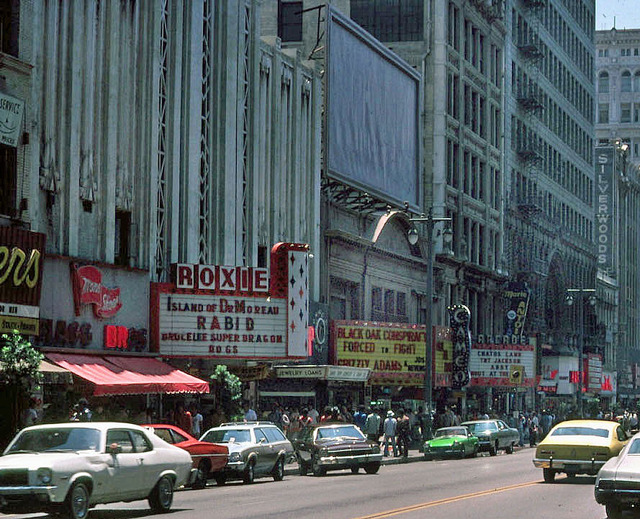 The first Pantages Theatre in Los Angeles opened on 26th September 1910 with a 7 acts vaudeville program which included Barnold’s Dog & Monkey Pantomime in “A Hot Time in Dogville” featuring Dan, a four-legged canine drunk. Dan was followed on stage by newcomer and New York sensation Sophie Tucker, ‘the last of the red hot mamas’. What happened on stage was also the theme of the architecture of the theatre which was described as being in an “English Music Hall style”. The first Pantages Theatre in Los Angeles was designed by architects Octavius J. Morgan & J.A. Walls with seating provided for 1,400.

Developer William Garland had persuaded Alexander Pantages to locate his new theatre on S. Broadway, rather than on S. Main Street & S. Spring Street where most other theatres of Downtown Los Angeles were located at that time. The name ‘Pantages’ is still visible in the stonework on the facade above the marquee and the seven story structure is carried out in a Beaux-Arts style, characterized by Classical ornament and tripartite vertical divisions. Inside the long narrow auditorium seating was on three levels, orchestra, balcony and gallery, with a series of side boxes adjacent to the square proscenium. Above the proscenium, on the large alcove ceiling was a painted mural (now painted over). The main cast-plaster ceiling over the balcony & gallery seating is constructed as a suspended shell with a basket-weave patterned surface. It was equipped with a Robert Morton 2 manual / 16 ranks organ.

Pantages opened their new theatre at the corner of 7th Street & S. Hill Street in August 1920 (from 1929 it become the Warner Downtown Theatre) and this first Pantages Theatre was closed in December 1921 to allow a photoplayer to be installed. It was taken over by the Dalton brothers in 1922 who renamed it Dalton’s Broadway Theatre. The Robert Morton organ was removed in 1924 and installed in the Pantages Theatre, San Diego. The Pantages Theatre was renamed Arcade Theatre in 1924 to associate it with the newly built adjacent Broadway Arcade. The Arcade Theatre was remodeled to the plans of Oscar N. Land and reopened on April 30, 1927 when it was operated by Principal Theaters Corp. of America. The reopening movie was “The Red Kimono” starring Adela Rogers. It became a burlesque house on July 30, 1932 and Lou Costello (later of Abbott & Costello fame) played at the Arcade Theatre.

The theatre had some modifications carried out by architect Simeon Charles Lee in 1937-1938 when a new marquee was added to the front entrance, the lobby was modernised and the side boxes in the auditorium were removed. The upper gallery was closed at this time because of poor sightlines to the screen and the seating capacity of the theatre was reduced to 800. On August 22, 1941 it became a newsreel theatre renamed Telenews Theatre. This was short lived and it returned to its Arcade Theatre name and feature films from November 1941. It was briefly known as the Teleview Theatre and again returned to Arcade Theatre. During its last years of operation as a ‘grind house’ it screened 4 or 5 movies continuously from around 9am until 4am the next day.

The Arcade Theatre was closed by Metropolitan Theatres in the Winter of 1992. In 1993 the lobby began use as an electronics store, while the auditorium remains inact and is used for storage.

The Academy Theatre is Designated an Historic-Cultural Monument.

This theater celebrates its 100th birthday this Saturday.
it’s opening was September 25, 1910

?? I have a capacity listing of 800 for the Arcade. That was possibly a result of S. Charles Lee’s 1938 remodeling with 1,400 being the original capacity. Looks like from one of the photos that much of the original ornate décor (at least of the proscenium) survived the 1938 remodeling.

Apparently, at some point before Wurlitzer theatre pipe organ opus 1057 was installed in 1927, this organ had a two-manual Smith theatre pipe organ, at least according to Junchen’s “Encyclopedia of the American Theatre Organ”, pg. 628. No further details are given, but I would assume Wurlitzer took the organ in on trade(?)

I visited the Arcade a while back. Check out a short write up and some photos at After the Final Curtain

Great article, Matt! I especially appreciate the photos taken. Very haunting, and yet serene in the visibility that aside from the removal of the seats, the place hasn’t been touched. Hopefully a restoration and career as a movie palace will ensue.