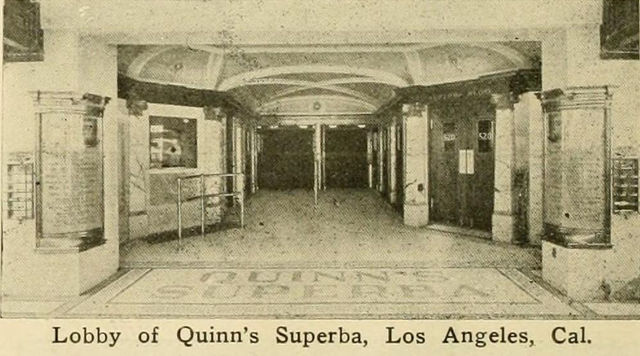 Quinn’s Superba Theatre was located on the site where the Roxie Theatre is today on S. Broadway in downtown Los Angeles. It was a conversion of an existing built to the plans of architect Arthur H. Memmler. It opened on July 30, 1914 with 1,600 seats.

Quinn’s Superba Theatre was next to the Cameo Theatre (formerly Clune’s Broadway Theatre) and the Pantages Theatre (later Arcade Theatre). It was last operated by Universal Chain Theatrical Enterprises Inc. who closed it on December 11, 1922 with Herbert Rawlinson in “One Wonderful Night”. The interior was gutted and it was converted into Tait’s Coffee Shop which opened in late-March 1923. Tait’s Coffee Shop was closed in June 1931.

The building was razed to make way for the Art Deco style Roxie Theatre which was the last theatre built on S. Broadway, opening November 25, 1931.

So the coffee shop was only around for eight years? And then replaced by tbe Roxie?

Some more wayposts from the Los Angeles Times:

July 31 1914: ‘Quinn’s Superba, the latest pretentious motion picture of Los Angeles, had its formal opening last night. The Superba was constructed at much expense, the management saying that almost $100,00 was spent before the theater could open. There are 6000 electric bulbs. In the theater proper they are obscured. The ceiling presents something unique in frescoing. The exits are ample, and the entrance presents electric bulbs shining behind onyx and marble.’

Aug 2 1914: â€˜Indications are that Quinnâ€™s Superba, which had its formal opening Thursday evening, will take its place as one of the popular motion picture palaces of Los Angelesâ€¦ The Superba has one of the most beautiful theater interiors in the city, and the exterior is a blaze of light.â€™

Nov 8 1914: Quinn announces he has secured the rights to show Paramount Pictures hereafter.

Nov 29 1915: THEATER RUNS ALL NIGHT
â€˜What the management of Quinnâ€™s Superba Theater declare to be a worldâ€™s record in the moving-picture business was set yesterday morning when, at 9 oâ€™clock, the picture house completed a twenty-four-hour continuous run of its show. In that time thirteen performances were given each lasting a little less than two hours, and approximately 12,000 persons were admitted. At 3 oâ€™clock in the morning, according to the management, all the seats were sold. The 5 oâ€™clock attendance was lighter.â€™

Aug 16 1921: SHORT SKIRT HOOPLA AT SUPERBA
â€˜Here girls, hereâ€™s your chance at a prize. Manager James W Anderson of the Superba Theater, announces offering a prize for the â€œshortest skirtâ€ worn at his theater Wednesday. There is but one stipulation, and that is that the women seeking to qualify for the prize must be between 19 and 55 years of age. Measurements will be taken in the lobby of the theater, and all entrants to the contest need but to signify the fact at the box office.
â€˜Gladys Walton in Short Skirts, this weekâ€™s attraction at the Superba is the incentive for the contest.â€™

The 1922 obituary notice in the house says that Laemmle’s Universal had purchased it six years previously. The Universal people refused to answer rumors that they had sold it to the coffee shop man.

Here’s the Superba-as-plain-Superba after it was no longer Quinn’s:
View link

The Historic Los Angles Theaters site makes a good point. The Roxie’s stagehouse is rather unusual for a 1931 theater. Is it possible that some or all of the shell of the original Superba house was kept intact, with only the front building demolished and most of the theater building itself only gutted and renovated, and is still existing today as part of the Roxie? Is there any way to know?

This is about the Roxie but it still isn’t clear about the construction, but the cost seems a lot for a refurbished building:

Constuction work on a theater and store building at 516 South Broadway (maybe the address was changed later) began last week, the playhouse to be known as the Roxie and the building to contain four storerooms. The cost is estimated at $100,000.
Announcement of the project was made by G.A. Metzger and Harry Srere, who, with associates, are the lessees. The contract for construction has been awarded the J.M. Cooper Company. G.Y. Ridenbaugh of the Charles G. Andrews Company, realty broker, and P.L. corrigan represented the lessor and lessees.
The structure will have a frontage on North Broadway of eighty-one feet. The depth of the property is in excess of 165 feet. The theater will have a seating capacity of 1600.

The October 3, 1914, issue of The Moving Picture World had an effusive description of Quinn’s Superba Theatre:

“IT is quite within the bounds of reason to say that in the past year there is no other city in the world that has gone ahead in motion picture theater construction as rapidly as Los Angeles. A short twelve months ago the average theater manager was well satisfied with a modest interior and an exterior outlined with lights placed at intervals of a foot or more and a fair sized electric sign. A good exemplification of what the public now demands is the new picture palace erected on Broadway, near Fifth, by J. A. Quinn, and called Quinn’s Superba.

“Mr. Quinn is a Los Angeles manager of recognized ability and was among the first to employ, to the exclusion of all others systems, the indirect lighting plan that enhances the beauty of Quinn’s Superba; he has also been highly complimented in having worked out the elaborate light decorations on the facade which make this beautiful edifice stand out. Mr. Quinn is in favor of making Los Angeles preeminently the ‘City of Lights,’ and he is certainly doing his share towards carrying out his favorite hobby. The mammoth electric working sign which surmounts the three-story structure is among the largest used by any theater in the west. On each side of the name is a unicorn of heroic proportion darting a fiery tongue at his companion; ribbons of light steam over the front of the building, which is carried out in the rennaissance style of architecture, in colors of cream and white. A massive cornice and frieze with theatrical figures modeled therein gives an appropriate touch to the whole. The markee is a solid mass of lights, art glass and copper.

“The lobby, foyer and auditorium are carried out in the classic style of architecture. The woodwork of the foyer is selected mahogany of beautiful grain, and the walls are paneled with large beveled plate mirrors. The floor is carpeted in deep red Wilton velvet.

“In the auditorium the walls and ceiling are held in soft light green tones, trimmed with cream and gray effects and high-lighted in orange. The sounding cove over the proscenium arch has a beautiful mural painting by a well-known local artist. This cove, aside from its decorative effect, assures such perfect accoustic properties that the faintest whisper from the proscenium area can be distinctly heard in any part of the house. On each side of the proscenium and midway between the footlight line and the cornice, are balconies with draped French windows, adaptable for singing-specialties. The stage itself is well equipped in spite of the fact that it is a miniature one.

“The floor of the auditorium is bowled and the seats are arranged in circular form. The carpets, luxurious upholstered leather opera chairs, silk velour drapes and velvet stage curtains are of a deep red. An efficient ventilating system assures the air’s changing completely every few moments, it being estimated that there is supplied thirty cubic feet of fresh air to each person, each minute, allowing for a capacity audience at all times.

“The Superba is using the best available pictures and the equipment for its proper projection is unsurpassed.

“Their soloists provide high-class musical numbers on each program and an orchestra of twelve pieces under the direction of Miss Mae Gates plays accompaniments for both pictures and the vocal numbers.” 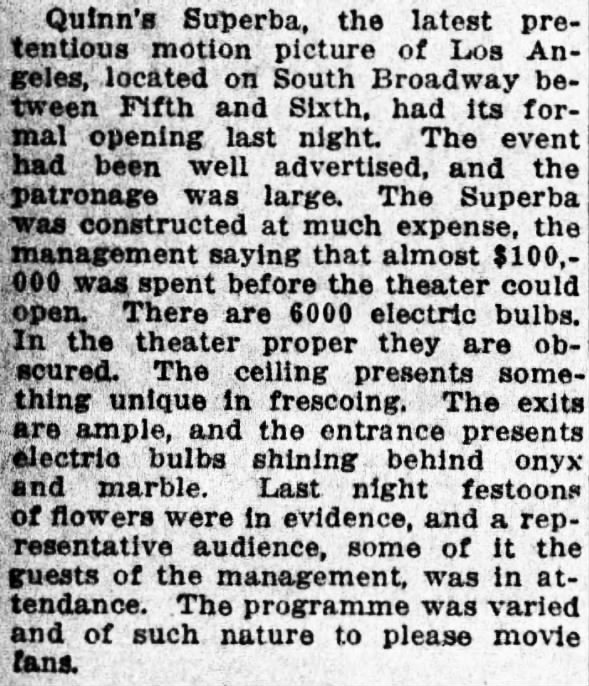 A notice that a permit had been issued to add to a building at 516-520 S. Broadway and remodel it for use as a motion picture theater for J. A. Quinn appeared in the April 18, 1914 issue of Southwest Contractor. The architect for the project was Arthur H. Memmler.