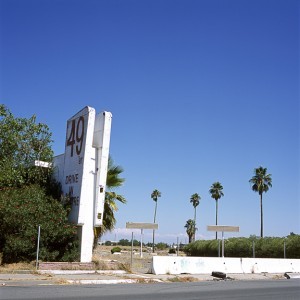 The original screen was wider at one time. Wind blew one end down and the decision was to just leave it as is. There was a building at the bottom of the main screen. It was the manager’s residence. I don’t know when it was torn down. Early 60’s or before. I can’t remember the transition from one to six screens. Three screens were added, two to the right of the main screen and one at the back of the snack bar. Two more screens were added next to the entrance along with a satellite projection booth. The theater needed upgrades and repairs but the income did not justify the expense. My office was in what used to be the manager’s residence in the new snack bar. After closing, and after repeated break-ins, the final straw was when scrappers removed the main power panel copper bars. Soon after, the building was razed. That must have been around 2002.

I actually lived under the large main screen when I was in elementary school and most of the way through junior high, my father was the manager and we were there when they started to add all the screens. What a blast it was to have been a part of this, I even worked in the snack bar for a while in my teen years , my mother took over when my father passed and they Syufy people who owned this drive-in were very good people to us. Thank you for the memories

to Tim Hale I remember you this is Sharon the 2nd oldest of the girls. I am married with 2 daughters and 3 grandsons. How has life treated you

This opened as the Bell Drive-In on June 29th, 1950. Grand opening ad posted. More to come.

Reopened as 49er with “The mask” and ‘Wonders of Aladdin", reopened as as a twin on screen 1 with “The conqueror worm” and “The oblong box” and on screen 2 with “Rosemary’s baby” and “Goodbye, Columbus”.

I think the site has been demolished and cleared(except maybe the ramps?)?