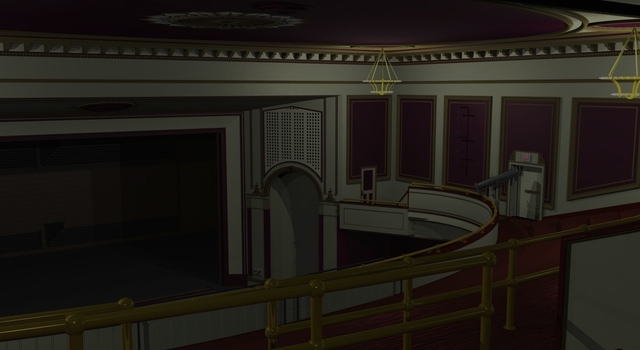 The Strand Theater opened on 23 April 1917 as a modern space for live performances, designed to replace the venerable Lyceum Theater. The latter, built in 1893 on the site of the current City Hall at East Greene and South Cayuga Streets, had served as Ithaca’s main auditorium for leading travelling companies, but with the advent of electricity it had become quickly outmoded. The Strand, designed by Edgar Townsley and built by the Driscoll Brothers Co., offered the most modern facilities for stage and screen use in Central New York. Its orchestra sat 1,050 and its balcony sat 600.

The Stand Theater’s facade was distinctively designed in the Tudor Revival style, with Gothic arches and window casements, stone heads representing Comedy and Tragedy, and an evocative whiff of London’s theatrical Strand area. Its 60' long x 26' wide lobby boasted a terrazzo floor and marble stairs with brass railings leading to the balcony. The interior was designed in the Adamesque style, with pleasing symmetries, gilt bas reliefs on ivory plaster walls, and rose draperies in the parallel box seats and stage area. The rectangular proscenium measured 37' wide and 24' high, with a stage depth of 34' feet, and an orchestra pit of 30' x 8'. Fly space climbed 55' high.

The Strand Theater vied with the Lyceum Theater as host to distinguished touring companies, and it became the prime venue for such companies when the Lyceum Theater closed in 1927. Memorable productions include Eugene O'Neill’s “Strange Interlude” with sets by Jo Mielziner in April 1931; Katherine Hepburn, Van Heflin, and Joseph Cotton in “Philadelphia Story” in October 1940; Erich von Stroheim in “Arsenic and Old Lace” in September 1941; and the National Touring Company of “Oklahoma” in April 1949. From the beginning, the Strand had showed movies between live bookings, but from 1950 to 1976 it presented only films. Memorable features in the early 1970s include “They Shoot Horses, Don’t They?”, “A New Leaf”, “Cabaret”, and “Frenzy”.

When the Strand Theater closed in 1976 because of a leaking roof and deteriorated heating plant, community groups mounted an impressive effort to “Save the Strand”. Upon raising several hundred thousand dollars for repairs and renovations, the Ithaca Association reopened the theater in 1979 for live performances by the Ithaca Ballet, the Ithaca Opera, and local theater groups. By 1982, however, debts and further maintenance problems had mounted, and the theater closed permanently.

The building was razed in the late-1980’s, and the site now is given to an open parking lot.

Thanks for this information, which is very interesting. I recently purchased a 1906 color post card of the interior of the Ithaca Lyceum. It was a very beautiful theater, indeed. I’ll try to post a scan of the card here, if I can figure out how to.

I walked past the Strand yesterday. It’s still a parking lot. And the walls on the adjacent walls have some graffiti on them.

Rick or Ron,
I would like some info on John Noble. You say in your Post his name was John A. Noble and I was wondering if his middle name was Arthur and did he perhaps go by his midddle name as I have, perhaps, some info relating to him. Inscribed on the side of an old wooden instrument locker in the orchestra cage under the stage at the Strand in rather elegant script including hand drawn scroll work and border was
“Here lies J. Arthur Noble
His Epitaph
August 1926”

and following at the bottom someone added “Wowie Zimbo"
A term I had never heard before. This is as best my memory can recollect as I have not seen it since 1981 and I do not know if the cabinets survived the theater. I might be a little off on the date.

As an aside about near-far and far-Near I would like to point out that there were/are several theaters in Ithaca that have not been mentioned and might fit. The Lyceum might have been the Far-near as it was around the corner on Cayuga Street from the State(Near-Far) and still existed uptil I believe 1957 when a fire more or less ruined the theater. I recall a photo of a 50’s style fire engine ladder truck spraying water on the facade.(If someone would go to the Tompkins County Library and look at the microfilm of old Ithaca Journals this date can br rectified) Although mostly performances were held there I believe there mere movieolas as well. The last performance was a cooking show and I think it is widely believed that this had nothing to do with the fire.
In the history of Ithaca there were many theaters in this area. I would say an inordinate amount but considering some movies were made in Ithaca at Wharton Studios it is not surprising.
Other theaters not mentioned in CT are the Crescent and Star theaters. Both existed in the ‘50’s and the Crescent building exists today. The Crescent was/is at the base of Buffalo St. hill on Aurora St. and would be a candidate for Near-Near although I do not know when the Crescent stopped showing movies and started showing basketball games. The Crescent did not have a stage. Many people might remeber the Crescent as the Arcade Night Club from the 70’s and 80’s. Today it has been converted to offices and apartments. At least it is not a parking lot. It may be oldest theater in Ithaca today.
The Star was located either right next to the Temple theater on Seneca St. or a block west and was the premier stage in Ithaca whereas the Lyceum was the premier house. The 2 were in heavy competition until April 1917 when the Strand Theatre opened. The Strand was the queen. It had it all. Full size stage, engineered acoustics, and not a bad seat in the house. And she wasn’t that bad to look at either with her simple elegance.
A more extensive list of theaters in Ithaca as my memory recollects.
The Manhattan Theatre. – late 1800’s vaudeville
The Little Theatre – Located in Clinton Hall around the turn of the century.-vaudeville (may be the oldest if it still exists in the building)
The Star Theatre – vaudeville/performing arts/movies
The Crescent Theater-Movies only
The Lyceum Theatre-vaudeville/performing arts/movies
The Temple-I do not know if the Temple had a stage. movies
The Strand Theater- Vaudeville/movies/performing arts – Of
The State Theater- half a stage. Vaudeville/movies
The Ithaca Theater- Movies

These theaters were all located in a 10 by 3 block strip in downtown.
Other area theaters include but are not limited to
Fall Creek Cinema – Movies – a converted grocery store.
The Hangar Theatre – Performing arts – A converted airplane hangar.
The Triphammer Theater – Movies, Located in Lansing

I have not been in Ithaca on a regular basis and have no information on the Kitchen Theater. In fact it has been so long since I did research on the Strand in old Ithaca Journals that I have to question some of my data.

Lastly, Since CT is making little, if any, progress on the photo data base I offer this link View link for a continuing forum on The Strand Theatre, Theaters of Ithaca, or my conservative politics.

To Minstrel777- re: John Noble. According to the little article in the Paragon Ragtime Orchestra newsletter, he died after the 1920s. If his middle name was Arthur, then maybe the “gravestone” backstage at the Strand was some sort of inside joke. You seem to know a lot about Ithaca theaters, so perhaps you could write pages here in CT for those not already in the data base, such as the Lyceum.

Minstrel – I compared photo on your site to google earth and my memory of that block, and that photo is not a current representation of the area. The building with the strand sign on it is not there, and has not been there some 17 years. (Search Google on the address, and it will show you the hole, and the empty lot behind where the auditorium was.)

The Triphammer theater is long gone as well. Hoyt’s fixed it up in the 1996 or so, turned it into a multi-cinema. I saw a couple of movies there before moving away. By 2000 it was closed again, and is now a hotel.

Yes Paul,
Parking lots are so attractive – all in the name of progress. The images I have are not photos. they are 3d renderings of what I remember. (a set of floor plans helped and the STRAND sign is interpreted from an early 1920’s photo)You may go to Google’s 3D warehouse and search ithaca NY to view the model. I hope to have it ready for download later this spring.

The Comerford Amusement Co. apparently look control of this in 1928 and did some remodeling work.

This opened on April 23rd, 1917. Grand opening ad in the photo section.

I’m working on a project to try and put together a watch list for some writers who were living in Ithaca in the 40s and 50s – does anyone have an information about the comparative ticket prices at the operating theaters in that period? We’ve looked through advertisements in the Ithaca Journal but have been unsuccessful in finding prices.