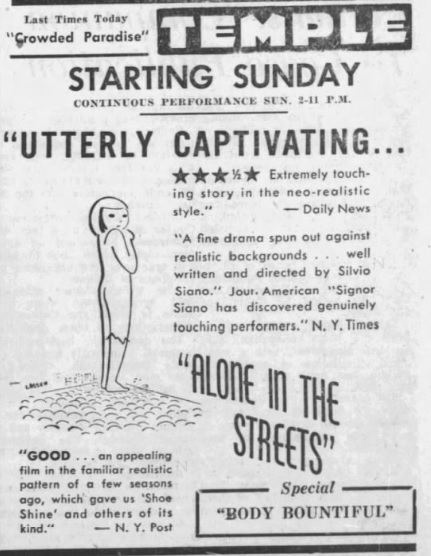 The Temple Theater opened December 13 1928 with “Annapolis”. Designed exclusively for showing movies, it quickly adapted to sound films. It was a two-story, free-standing structure with a red-brick facade in an undistinguished Colonial Revival style. Its triangular marquee with red neon tubing and white-on-black lettering afforded barely enough space for the film’s name.

Without a balcony and with only the most primitive rake and non-staggered seating, the theater accommodated about 700 patrons. The street-side box office led to a small lobby space with a shabby concession stand and even shabbier restrooms. The auditorium was a long narrow box with a central aisle and two banks of seats. Its walls were blue stucco with yellow sidelights, and its small proscenium carried a yellow curtain. The cramped stage apron supported an all-purpose rectangular screen that severely cropped CinemaScope pictures at the sides and widescreen pictures at the top and bottom.

For all its inconveniences, the Temple nonetheless managed to book some of the era’s most important films, rivaling the town’s larger and more comfortable theaters with its programs. Memorable films from the early-1970’s include “The Godfather”, “The Godfather II”, “Catch 22”, “Fidder on the Roof”, “The Last Picture Show”, “Day for Night”, “Fellini’s Satyricon”, and umpteen revivals of “The Yellow Submarine”.

The theater closed abruptly in 1976 with the advent of the multiplex at the Pyramid Mall. The building was promptly razed and its site is now occupied by the drive-in facility of the Tompkins Trust Company.

During the fifties, when I attended Cornell, the Temple presented most of the foreign-langage films that were released, and shortly after their New York City openings. The poor sightlines made reading subtitles very difficult.

Paul: I never understood how or why the grungy Temple trumped the beautiful State or Strand in booking the biggest-budget films of the early ‘70s. Perhaps because it was small, it could count on showing the films for long runs even as audiences diminished during those runs.

One of the first films I saw there was the truly awful “Love Story,” in which an early scene depicts a Cornell-Harvard hockey game at Cornell. The audience went predictably wild, not the least because the campus used for filming was clearly not Cornell. After that scene, the film went downhill quickly.

There is a four rank Link theater organ in a workers safety museum in Dortmund, Germany. I e-mailed the museum inquiring about this instrument. According to the person who replied, this particular instrument was originally used in the Temple Theater. It was removed at some point and used in a nearby Methodist church from 1935-1960, then purchased by an individual who had it until 1992. This person then sold it to the museum. It is demonstrated on a regular basis to museum visitors.

I’m working with Historic Ithaca to restore the ticket booth of the Temple Theatre and am very interested in this theatre in general. If you have any memories or memorabilia from the theatre, please let me know! I’d love to hear more stories and see any photos or other materials you have. Thanks!

This opened on December 13th, 1928, one week after the opening of the State. Grand opening ad in the photo section.

I worked as an Usher at different times at this theater in the mid 50’s. Jerry LaFavor

Hey Cinema Treasurers – if anyone has any info on the ticket pricing at the Temple – or any other theater in ithaca around the 40s and 50s, I’d love to have it. I’m working on a research project about movie theaters in ithaca. Thanks in advance! Nathaniel