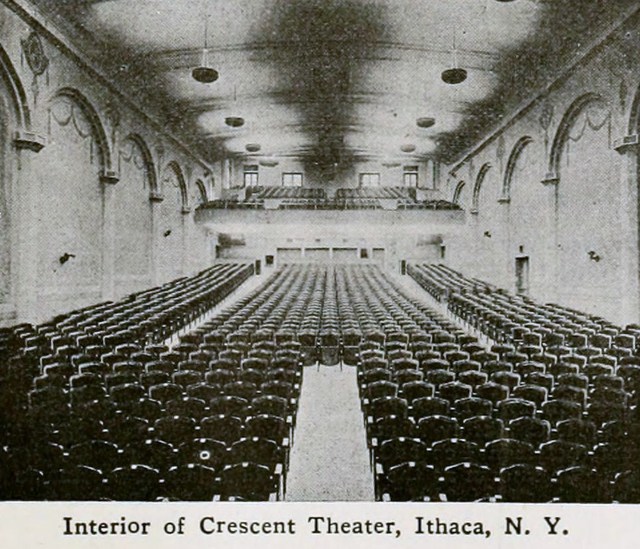 The Crescent Theatre was opened November 27, 1916 and was equipped with a 2 manual Marr & Colton organ. It was operated by the same operators as the Star Theatre. The majority of the seating was provided in orchestra level, and there was a small balcony.

The Crescent Theatre had been closed for eleven years when plans to remodel and reopen it were announced in the April 11, 1941, issue of The Film Daily:

“Long-Shuttered House Will Be Reconditioned

“Ithaca — Plans to remodel and refurnish the old Crescent Theater to operate as a second-run house and to improve the Strand, have been announced here.

“In announcing the changes, Jules Berinstein, general manager of Cornell Theaters, Inc., said that the Crescent will be reopened as ‘a new theater.’ He said the building will be reconditioned throughout, with 1,200 seats all on one floor. Latest sound equipment will be installed. A new front is also planned. Work is slated to be completed in time for a September opening.

“New seats, a remodeled entrance and new decorations are among the improvements slated for the Strand during the Summer.

“The Crescent, acquired by the Cornell Theaters, Inc., in February, 1929, has been closed 11 years.”I haven’t been able to find anything else about the reopening, so I don’t know if the project was carried out or not, or if so whether the house reopened under its original name or another name.

This opened on November 27th, 1916. Grand opening ad in the photo section.

Hey Cinema Treasurers – if anyone has any info on the ticket pricing at the Crescent – or any other theater in ithaca around the 40s and 50s, I’d love to have it. I’m working on a research project about movie theaters in ithaca. Thanks in advance! Nathaniel