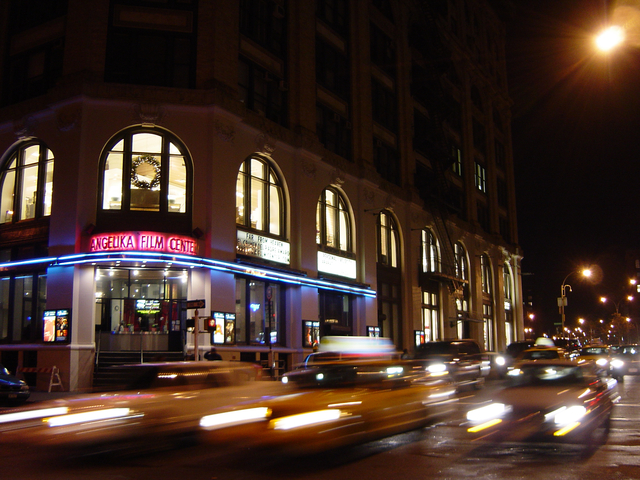 Originally built in 1894 as a cable power building for the New York Cable Car Company, it was designed in a Beaux Arts style by noted architects McKim, Mead & White.

The Angelika Film Center opened on September 29, 1989, this New York theater is famous for helping to make independent films the vibrant part of the film industry they have become in recent years. Many of the best independent films of the past decade debuted at the Angelika during one of the many film festivals held at the theater.

As sometimes happens in the pricey real estate environment of New York City, the Angelika’s screens are located underground. Audiences enter on the ground level to a large and welcoming café, and then take escalators down to the theater level. Occupying the entire first floor, the café, a unique feature of the Angelika, is perhaps the most critical part of what has made the Angelika a success. Between festivals, it serves as an impromptu salon for tomorrow’s filmmakers. During festivals, it hosts scores of film industry types.

Architecturally, however, the theater is unremarkable and its screens draw constant complaints about their tiny size, poor sound, uncomfortable seats, and lack of sound proofing. It’s quite possible to hear the rumble of a subway train during a screening, as the Angelika is not far from a major subway station.

But as long as it serves up the very best of independent and foreign films, the Angelika’s audience will continue to embrace the theater. In early-2021 it was renamed Angelika New York.

The theater name has not changed to “Angelika New York” and is still “Angelika Film Center” just like the storefront (behind the scaffolding) visible from the street reads, as depicted in the photo above.

@DERMYCAR, according to the Angelika website, the name is Angelika New York

Do you mean the website: angelikafilmcenter.com? There are six nationwide Angelika Film Centers, with Angelika Film Center & Cafe in NYC being the original. Also, if you look at the banner on the website, it states “Angelika Film Center”. I believe you’re looking at a website organizational tool (in the top left of the home screen) that is not indicative of the site name, as much as it is a quick ID tag for guests to switch amongst branded theaters.

yes, if you click on the theatre’s it Angelika New York, see photo. The parent company Reading eliminated City Cinemas in NYC and branded it’s three theaters under Angelika

Their ad in the New York Times Says FILM CENTER. Stop it.

You’re basing the confirmation on the business name on a quick link on the website that has a max character length. Just like “Angelika at Mosaic in Fairfax” is not the official name of the theater: Angelika Film Center & Cafe at Mosaic (check what’s on Fandango for reference). Angelika Film Center & Cafe is located on every logo, cafe napkin, employee shirt and, most importantly, the logo on front of the business.

ANGELIKA FILM CENTER & CAFE is a brand based off one theater: Angelika Film Center & Cafe in NYC.

The distributors don’t even get the updated information, the City Cinemas name is now obsolete, the official website is what counts.