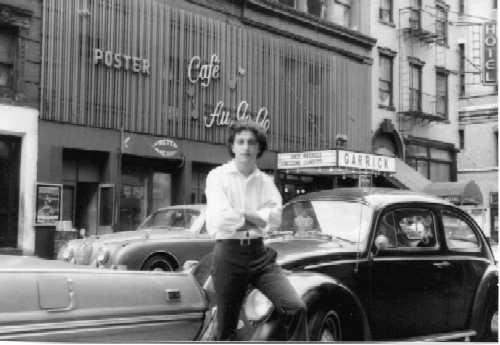 The Garrick Cinema was opened prior to 1964. I know nothing about this theatre, except that in a block advertisement it shared with the Elgin Theatre in 1972 it appears to have had a similar revival policy.

A CASTLE theatre was showing movies at this address in 1919. Could it be the same building as the Garrick?

Footage from the unreleased film “Uncle Meat” by Frank Zappa has footage of Frank and the Mothers of Invention in all their glory performing at the Garrick in 1967 which has a quick shot of the house from the stage and indicates that it was indeed a very small space.

The Garrick was showing films as the NICKELODEON in 1964.

Hey Robbie Dupree, I can’t believe anyone wants to know this stuff. I was working in a light show from Seattle. We were downstairs from the Garrick in the Cafe Au Go-Go working with Country Joe and the Fish. Zappa came in and hired us on the spot.
When Joe finished his gig we went upstairs and spent 3 weekdays setting up our screens and equipment. Pretty funny, but he fired us after the first night. He said we took too much attention off the band. We took it as a compliment and moved on. I forget exactly what year it was, but I believe it was the summer of the first Woodstock festival.
concert.

Robbie Dupree, Another detail you might be interested in is that when Zappa was playing the Garrick, the Marquee simply read “MOTHERS ABSOLUTELY FREE”. I think it had something to do with the name of their then current album.
Anyway, I never had so much fun in my life as being in the Village during those times.

The marquee to what is, or is supposed to be, the Garrick Theatre can be seen in the 1967 film “The President’s Analyst,” about 54 minutes into the film, very briefly. I think the movie shot in New York City in June of 1967.

This theater should be listed as “demolished.” The building that contained both the Garrick Cinema and the Cafe Au Go Go (as well as the old residence hotel on the corner of Thompson) were demolished to make way for a new mid-rise apartment building with a Capital One Bank branch at ground level. The street view above is pointed towards the wrong corner of Bleecker and Thompson Streets. Swing it around 180 degrees to the left to view the current state of the theater’s former location.

I worked with the Off Broadway production of “MacBird!” It ran from February 1967 to January of 1978. We closed our run at the Garrick after first playing the Village Gate (Elizabethan 3-quarter stage), then moving across the street to Circle in the Square (extreme thrust stage). We never left Bleecker St., the Garrick being one block east from our first two theaters, in the same block as the Bleecker St. Cinema. The Garrick was a narrow (“bowling alley”) proscenium house that had ceased playing films. We may have been the last show there.

The original Garrick Theatre in Manhattan was built in 1890 on 35th St. as a Broadway theatre & demolished in 1932. It has a Wikipedia entry. These were different theatres at differnt locations.