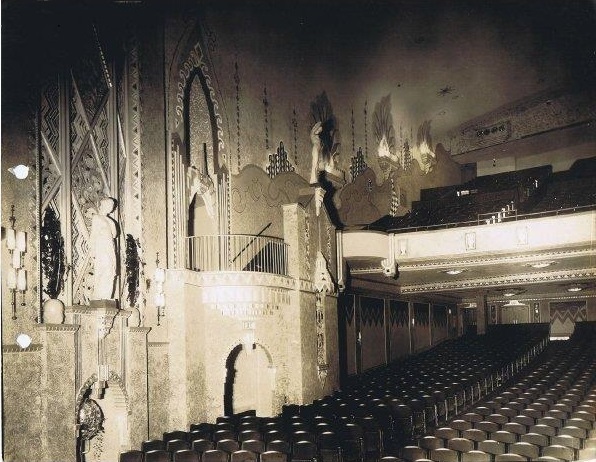 The Butler Theatre was built for the Harris Amusement Company and opened September 23, 1930. By 1941 it had been taken over by Warner Brothers Circuit Management Co. It was closed July 20, 1965 with “The Yellow Rolls-Royce”. It was demolished later in 1965.

And since it was an Eberson theatre, an art deco interior photo would be most interesting!

The Eberson archives at the Wolfsonian in Florida have this listed as the Harris Theatre with an album containing 31 photos.

Patsy:it would seem that as it was built for the Harris Amusement Co it was given the tentative title of Harris Theatre but was eventually named the Butler.The Wolfsonian does have a website but no access to photos.They have photos of most of his atmospherics.They are located in Miami but you would need to visit them in person to see any photos and make an appointment.I am hoping to pay them a visit next year.

This weblog post features a photo of the Butler Theatr. The caption mistakenly says that the theater was torn down in 1960, though the movie on the marquee was released in 1965.

This house might have been a replacement for (or rebuilding of) the Butler Theatre that was mentioned in the October 23, 1915, issue of Motography:

“The new Butler theater, formerly the Orpheum, in Butler, opened the twenty-third of September.”

Oops, Not the Fisher house, but we purchased the McDonald House at 218 First St where this was the dining room chandelier.

The Butler Theater was built in 1929 by Harris Amusement Co. and the Warner Brothers theater chain bought it soon after it was built. It was touted as “one of the finest in Western PA”. It once hosted band leader Glenn Miller & Sally Rand the fan dancer. The Butler Theater only showed first run Warner Brother films and its companion the Majestic Theater showed the second run Warner Brother films. The theater was razed in 1965 to make room for PNC’s drive thru bank. Info from Butler Eagle Progress 1994 March 25 & 30. – See more at: http://clcing.blogspot.com/2010/08/butler-theater.html#sthash.YjiqriOs.dpuf