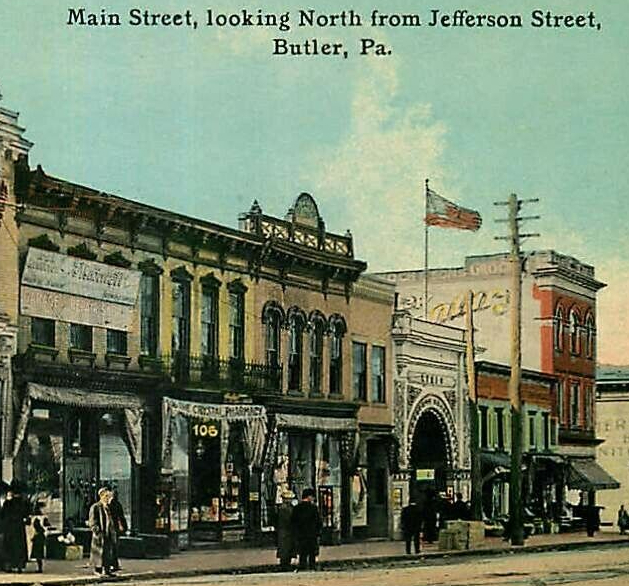 The February 6, 1914, issue of Variety ran the following notice:

“Butler, Pa., is to have a new theatre. The present Lyric will be torn down and rebuilt at a cost of $50,000. No policy has been announced.”

Here we come to a bit of a puzzle. Electrical Record and Buyer’s Reference of Noavember, 1915, has this item about the project:

“The contract for the electrical work in the Lyric Theatre Play House in North Main street, Butler, Pa. has been awarded to The Electric Shop, 111 West Jefferson street, Buffalo. This building is 40 by 200 feet, three stories high. Conduit will be used throughout, The fixtures will be largely semi indirect bowls, This concern has also completed the electrical work in the new YMCA building the largest electrical job ever done in Butler.”

The problem is that the main restaurant building, supposedly the former Lyric Theatre, is not 40 feet wide, but that is about the width of the former Capitol Theatre next door, which is also about 200 feet deep. While the fronts of both buildings are only two stories high, the Capitol’s auditorium is indeed a bit higher than the adjacent three story office block on the corner of New Castle Street.

Could it be that local historians have lost track of what actually went on in these buildings, and the Lyric Theatre that was built in 1915 and mentioned in trade publications through the 1920s and into the 1930s was actually the house that later became the Capitol? Perhaps someone has access to the archives of the local newspaper in Butler and can find information to clear up this historical puzzle.