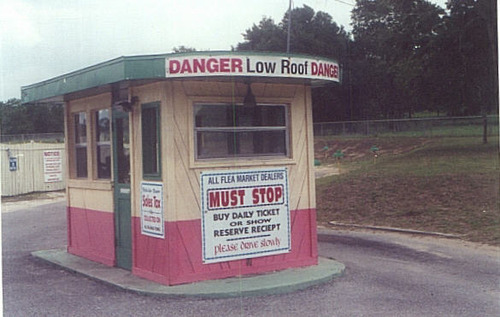 The Joy-Lan Drive-In opened March 9, 1950 with Edmund Gwenn in “Challenge to Lassie”. This single screen drive-in has a capacity for 396 cars and was operated by Carl Floyd, Floyd Theaters. It was closed in March 1995. New owners took over and it reopened October 11, 1996.

Thanks for the pictures MajorMajor.

Why is it called Jay-Lan?

A July 4, 2004 article in The Tampa Tribune said that The Dade City Banner said the Joy-Lan opened on March 9, 1950 with the movie Challenge to Lassie. It had “risen from a field in six weeks”. The Tribune itself first listed the Joy Lan in January 1951.

Carl Floyd was listed as the owner in the 1951-52 International Motion Picture Almanac.

As mentioned in that YouTube video that FloridaDriveIns posted, the Joy-Lan was closed in March 1995 by its owner, Floyd Theaters, which had recently sold most of its assets to Carmike. One of the conditions of the sale was that potential competitors such as the Joy-Lan had to be shut down.

Former Floyd Enterprises president Harold Spears formed Sun South Theaters and bought the Joy-Lan along with the Silver Moon in Lakeland, Fun Lan in Tampa, and the Lake Worth, formerly the Trail. The Joy-Lan reopened on Oct. 11, 1996.

Can they show scope films now?