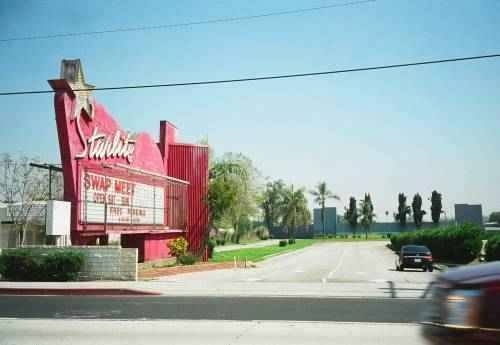 Since closing it has been used as a swap-meet. The screen was demolished in 1997 but the Art Deco style roadside marquee still stands.

Although Southwest Builder and Contractor announced in the issue of June 13, 1947, that Clifford and William Balch were preparing the plans for this theater, it appears that the owners decided to go with another architect. The March 25, 1950, issue of Boxoffice Magazine said that the Starlite was scheduled for a May opening, and that it had been designed by Los Angeles architect J. Arthur Drielsma. The magazine said that the theater could accomodate 850 cars. The original owners and operators of the Starlite were Ford Bratcher, his brother Carl Bratcher, and Byron Congdon.

I wouldn’t call the style Art Deco. If anything, it was Art Moderne, with early Googie overtones.

According to a comment posted to one of the photos that Monika linked on 3/17/08, the snack bar still exists and is “vintage.” I stopped by today, but it wasn’t open and the gate was closed. The marquee is worth the visit however. I hate to see any theater marked as “closed/demolished” as long as there are still some features to see.

Here is a photo of the marquee from February 2011:

Allegedly, this place is ripe and ready for a rebirth. Nothing concrete, just rumblings…

I grew up less than a mile from this theater. Went there many times with my father in the 50’s. I loved it! Back then it was fairly common for cars to have spot lights on them. In between shows people would turn on their spots, and have “wars” on the screen with each other.As I recall prices were about $1.25 a “CAR LOAD.” When prices went to “Per Person” people would hide friends in the trunk and sneak them in. Those were fun times!

My family had a pottery shop next to the drive in. We lived there for years and could go to the back of our property and watch the movies.

This theater/swap meet was owned by my father and his brother, who started in the cinema business with the silents. A tenant farmer through the depression, my father was consumed with the success of the Starlite, and rightly so. He and several siblings pooled savings to create the business. Eight extended family members of three generations eventually worked at the Starlite, along with many of the El Monte community. When market pressures forced drive-ins to syndicate, my father focused his intense drive on the swap meet. This theater became many things to many people, and had difficulties peculiar to a business of its type. The drive-in was a culture-changing phenomenon, where on a large property open to the public after dark, incidents of the type depicted on the screen might sometimes be realized. After syndication, an entirely remote business controlled the quality of films. The great number of hard working people eventually involved in the Starlite reflect the powerful and striving community of El Monte. The theater and swap meet offered entertainment at night, and during the day a business venue, at a low price. I still feel a child’s anticipation, as dusk falls on the playground under a colossal screen, and my mother calls me to the car. We snuggle down to await the movie and my father’s return from the snack bar—with hot donuts, just out of the machine.

This opened on June 15th, 1950. Grand opening ad from the independent drive-in section in the photo section. Taken over by Pacific Theatres in 1951.