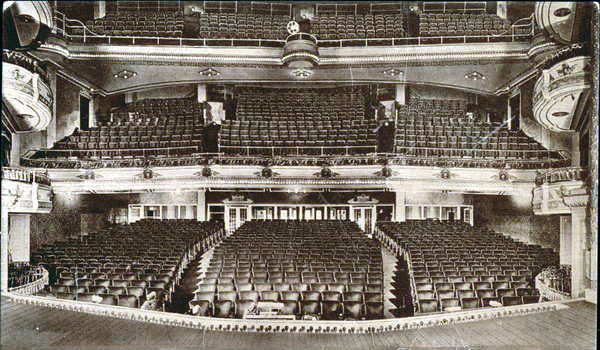 The MAJESTIC theater was a 1908 vaudeville house with its auditorium at right angle behind its 14-story MAJESTIC office building. The box office and lobby occupied the center bay of the office building and one proceeded through it to the white marble foyer of the auditorium behind, unless one went to the gallery in which case he had to use the declasse gallery box office and staircase off the alley. The center of the gallery rail was occupied by a half circle projection on which was placed the incandescent follow spotlight with its six-color revolving light filters. In the auditorium one found 1900 some seats in a wide house with six boxes on each side of the stage with curving fronts enriched with gilded fruit festoon moldings. Bentwood chairs with padded seats filled each box, each of which was draped in a simple rectangle of a fringed lambrequin. Three levels of leather seats faced a spacious stage the arch of which was adorned with molded festoons and Greek key designs. The switchboard backstage was the old marble-faced type, but the double row of footlights and other abundant lighting was adequately served, and the fully rigged wood-covered concrete stage saw use for much Vaudeville until 1930.The 20 dressing rooms served by a back stage elevator were complemented by the cellar under the alley for keeping the animal acts.

Orpheum vaudeville made frequent use of this theatre until they commissioned the architects who designed it, Kirchoff & Rose of Milwaukee, to create a much larger and fancier venue just a block eastward in 1928: the RIVERSIDE theatre. The MAJESTIC may have been glamorous 20 years earlier, but the movie palaces coming upon the scene with their elaborate decors and stages suitable also for vaudeville, made the MAJESTIC look like an unadorned old dowager. It struggled with hastily installed movies for two more years before it was demolished to become a parking lot for the very office building in front of it! That office building still stands as part of the Grand Avenue mall, but the theatre is long forgotten but for an old timer I met on the street one day who had a tear in his eye as he recalled the many years of his youth when he had enjoyed shows in the once MAJESTIC.

Interestingly, the photo here shows the upper facade of the white terra cotta MAJESTIC office building, and also the brown building to the left is the adjacent MERRILL office building (razed in 1935) which was like the MAJESTIC: the box office/lobby portion of the MERRILL theatre was through it, with the auditorium behind it, the shell of which still stands as a bank building as part of the Grand Avenue mall. If one gets permission, he can go to the attic and see the original steel gridiron and the rigging sheaves and blocks still up there.

The Majestic was the Milwaukee home of B.F. Keith’s vaudeville circuit. Milwaukee was one of only a handful of cities in which the Keith’s chain overlapped with Martin Beck’s Orpheum circuit. The Milwaukee Orpheum (later the Fox Palace) stood three blocks west at Sixth and Grand. When Keith’s merged with Orpheum in 1926, having two houses only blocks apart was extravagant, but times were good.

Keith-Orpheum segued into RKO in 1928 and the emphasis changed from stage acts to films, thus the push to build movie-oriented houses like the Riverside. When the depression hit, RKO unloaded some of its older, stage-oriented houses. In Milwaukee, the Orpheum-Palace passed to Fox in 1931, and the Majestic closed soon afterward.

Anyone know what happened to that Golden Toned Barton Theater Pipe Organ?