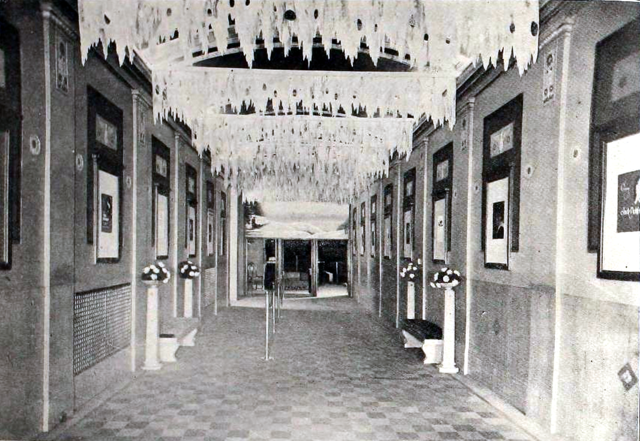 The MERRILL THEATRE was basically a vaudeville house, like so many others in downtown Milwaukee and across the nation, but it fit into that category of exhibitors called the ‘Photoplay Parlors’ which superseded the nickelodeons but before the movie palaces began to arrive around 1920.

The Merrill was named after the Merrill Office Building, an 1890s design by Milwaukee architects Van Ryn and Lesser, at 211 W. Wisconsin Avenue, a site now occupied by the 1930 Kresge office building as part of the Grand Avenue Mall, also called the ‘Shops of Grand Avenue.’ In 1915, when the “flickers” were starting to become a craze, the Ascher Bros. movie exhibitors of Chicago were seeking a foothold in Milwaukee and obtained a long lease on the center bay of the Merrill office building to build a lobby and box office, and then purchased the vacant lot behind the department store on the corner on the north, and adjacent to the BIJOU opera house of 1890 on the south on 2nd Street, and between these they built the auditorium and stagehouse portions of their MERRILL THEATRE, designed by architects Brust & Phillips. Its 1300 seats on the main floor and balcony were set under a gilded coffered ceiling in a modest hall with a small, 2-manual, 7-rank (voice) pipe “straight” pipe organ to accompany the silent movies between vaudeville shows.

The organ was built by one of the several such companies which then called Milwaukee home: the Wangerin-Weichardt Co. In the 1920s the MERRILL also sported its own 12-piece house orchestra, which listed Milwaukee’s own ‘Hildegarde’ as one of its musicians long before she became famous as a cabaret chanteuse (now retired and living in New York City).

When the Merrill office building was razed to build the Kresge (after which the famous discount store K-Mart is named) district office building, that left an auditorium at the rear with no front lobby or office, so the auditorium and stage house were converted first to a Kresge ‘dime store’ and in the 1960s to offices, a use to which it is still put. You can see the converted building to the right of the 2nd Street entrance to the Grand Avenue, the entrance of which marks the grave of the 1931 Enterprise Office/commercial building and of the 1800-seat BIJOU opera House of 1890 which ended as the GARRICK in 1930. One can see across the alley to the west of the Merrill’s site the MAJESTIC THEATRE’s site, a fancy 1908 vaudeville house which showed movies after RKO-Vaudeville left it in 1928 to move to the new RIVERSIDE theatre only a block away. The MAJESTIC, with no more vaudeville, and unable to compete with the new movie palaces, was razed in 1932, only two years after the MERRILL met the end of its days when the Kresge building was built.

The 1930s not only marked the beginning of the Great Depression, but also the end of vaudeville, the American version of the British ‘Music Hall,’ and many a theater either converted to sound movies or went by the wayside as newer, flashier entertainment dominated the scene. Only 20 years later and after yet another world war, these newer theatres would fall to the rise of suburbia, the decay of the old downtowns, and the advent of the multiplex cinemas.

No one will shed a tear for the Merrill, but one wonders what architectural wonders will replace these graceful theatres, as legitimate theatre is still struggling and electronic entertainment has all but replaced even the cinemas, as their costs rise and audiences stay home.

If this house was aka the Fox Merrill Theatre, the September 10, 1930, issue of The Film Daily reported that the circuit had closed it and that the building was to be used for a store.