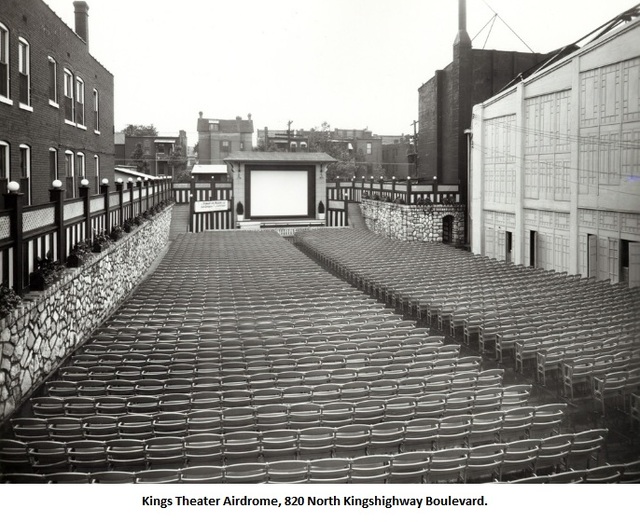 The 1,370-seat Kings Theatre was built in 1912 and had an adjoining airdome that gave a combined seating capacity of 3,600, the largest of any theatre up to that time. It was first a Loew’s house with vaudeville but when Loew’s canceled its Midwest vaudeville it began showing movies in 1923. On 4/21/23 a Wurlitzer pipe organ was installed (opus#0649) 2manual/6rank at a supposed cost of $25,000. When the organ was removed it was sold for parts and it is now scattered throughout the country.

It is said that antiques from the old Planters Hotel were scattered around the theatre for ambience. The auditorium was torn down in 1935 and the front of the building lived on for retail space. The same company that owned the Kings Theatre owned the Mozart Theatre also which was at Delmar and Bayard and was an airdome.

Here is the location as seen on Google maps. The small building is part of a used car lot. I have my doubts if this small structure was ever part of the theater. I think the status is closed/demolished.
http://tinyurl.com/58vkqo

According to the comment on July 4, the theater building apart from the airdrome had 1370 seats. Even if the auditorium was demolished, the remaining frontage would be much bigger than what’s there now. The theater has been demolished.

The address of 818 North Kingshighway is correct. At least it was, as the theatre was demolished in 1935.

When opened in January 1912 the Kings was one of the theatres of O. T. Crawford. After Crawford’s holdings were auctioned off for non-payment of debts in 1915, the theatre had a series of operators including William Goldman, Cella and Tate, Famous Players-Missouri, Loew’s, and the Skouras Brothers. Policies included stock companies, films and vaudeville. The last day the theatre was open in in May 1929, with the structure demolished in 1935.

The view shown here of the vacant lot next to the six story “FB San Remo Apartments” building is too far north of the Kings Theater and adjacent airdome. The used car dealership farther south is the exact location of the airdome. The low stone wall on the north edge of the dealership is the same stone wall that can be seen on the left side of the airdome in a photo that is on line. The building wall on the right side of the airdome in the photo belongs to the theater building. Note how the roof slopes, consistent with movie theater roofs. The other side of the theater building was just about at Enright. I wish I could post the images that I posted in Facebook’s group, “St. Louis History. Landmarks & Vintage photos.”

Ah, I see part of the image I referred to got posted as my profile picture. Strange!