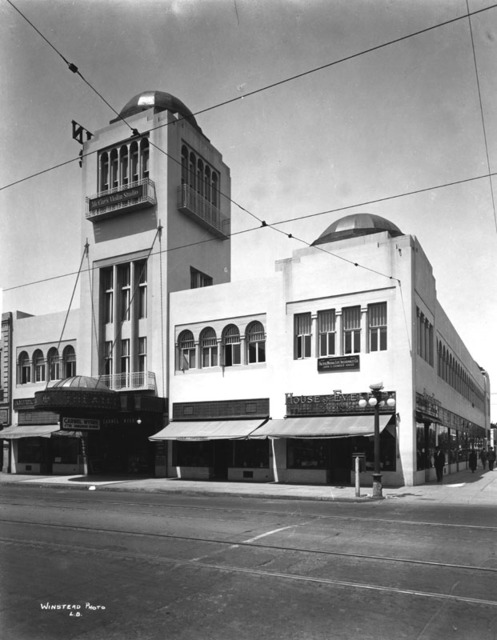 Opened in November, 1915, The Laughlin Theater was designed by the San Diego architect Irving Gill, a pioneering modernist whose clean, simple designs, anticipated those of the European modernists by several years. Though his work was largely inspired by Spanish Colonial architecture, particularly the Franciscan missions of California, his simplification of these forms also anticipated the Art Deco designs of the 1920’s. This was certainly the case with the Laughlin Theater, built fifteen years before the Exposition Internationale des Arts Decoratifs et Industrials Modernes, held in Paris in 1925, lent its name to the style.

The main facade of the Laughlin Theater along Pine Avenue, was divided into four bays, three of two floors, and a four story tower above the theater entrance. The bay on the corner of 4th Street was slightly higher than the two bays flanking the tower, and was surmounted by a dark, flattened dome of twelve segments. This dome was repeated atop the tall tower. The overall effect of the design was quite modern, the decoration being limited mostly to a few clusters of terra cotta ornament on the tower bay.

The interior of the theater was somewhat more ornate, featuring a decorative domed ceiling in the vestibule, and murals depicting “The Spirit of California” painted by the American Impressionist artist William Wendt.

Though Irving Gill was an early proponent of reinforced concrete construction, the Laughlin Theater was built of less durable brick and hollow clay tile. Irving Gill may have stretched the theater’s construction budget too far, in order to make the spectacular statement of the proto-deco tower. The earthquake of March 10th, 1933 caused the tower to collapse, and severely damaged the remainder of the building, and it was subsequently demolished.

Ken mc: The Laughlin had a wider entrance. See this correctly labeled picture:
http://jpg2.lapl.org/theater1/00014862.jpg
I think the picture you linked to definitely depicts the Palace, which had a very narrow entrance. An even better reason for believing that the LAPL has erroneously named this photo as being of the Laughlin is the fact that the name “Palace” can be made out (just barely), inscribed on the floor just in front of that pair of duded up fellows posing for the camera.

This interior photo is next in line sequentially after the one above. Do you think it’s the Laughlin or another theater?
http://jpg2.lapl.org/theater1/00014863.jpg

LONG BEACH, Oct. 23.—A former Long Beach police officer and two companions are being held by local police today following the looting of the box office of the Laughlin Theater early this morning and the carrying off of a safe containing nearly $1000.

There’s a story in the LA Times dated 1/8/17 about a dentist that committed suicide in his office. The office was in the Homer Laughlin Theater Building at 4th and Pine. His wife was concerned when he didn’t come home and went over to the Laughlin to ask if they had seen him. One of the theater employees went up to the dentist’s office and found the body, next to a note and a bottle of poison. The dentist was twenty eight years old.

Like everything else in the USC digital archives, the URL for the photo of the Laughlin to which I linked in October, 2006 has been moved. It’s currently here. USC dates it as “ca1930” but it’s undoubtedly much earlier- maybe near the time of opening in 1915.

Somehow I overlooked John C’s comment of Dec 3, 2005, with the question about the painter of the murals in the theatre. I can no longer find my original source naming Wendt as the artist, but I found a card referencing an article in the Long Beach Daily Telegram of November 4, 1915, which names Hanson Duvall Puthuff as the artist. The article by Gerdts also naming Puthuff as the artist is almost certainly correct, and the reference to Wendt should be removed from this theatre’s introduction.

Joe, your link moved again. Do you have the call number somewhere?

That’s the one. Thanks.

The Long Beach Independent reported on May 10, 1956 that the old Laughlin Theater building was to be razed. The last performance was in 1934. Following that, the building was used for storage.

Linkrot repair: this photo of the Laughlin Theatre is dated ca.1930 by the USC Digital Archive, but the movie advertised under the marquee is The Dangerous Moment, starring Carmel Myers, which was released in 1921. (Yes, this is the same photo we have on the Laughlin’s photo page, but the copy at the Archive can be zoomed really close.)

A curious, atypical and not particularly successful design by Irving Gill. Its date makes it a work of his mature style and suggests it may have been on the boards at the same time as Gill renowned Walter Luther Dodge House. What to make of the Laughlin Theater?

In 1907 Gill Had designed a wonderful house for Homer Laughlin, Jr. built in Los Angeles. Repeat clients and referrals from previous clients suggest an architect communicates well with those he builds for, and Gill had many of these.